Out of Time {Book Review} 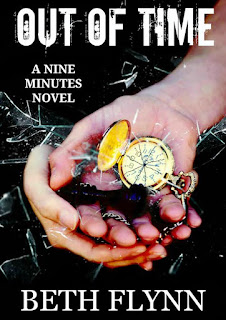 Title: Out of Time

RECOMMENDED FOR READERS 18 AND OLDER DUE TO
STRONG LANGUAGE, SEXUAL SITUATIONS AND VIOLENCE

Out of Time is book two in a series. It is not a standalone novel. I highly recommend that you read my first novel, Nine Minutes, to be able to understand the background stories of the main characters. There are many twists and turns in both books that can best be connected if read consecutively.

Although I do answer the outstanding questions from Nine Minutes, there is more to this story, and some readers may consider it a cliffhanger. If you do not like cliffhangers, you may want to wait until the third novel is released in 2016. Other readers may be satisfied with the answers and the ending. Regardless of which category you fall into, I hope you enjoy the story.

They thought with his execution it would all be over.
They were wrong.

The leader of one of South Florida’s most notorious and brutal motorcycle gangs has been put to death by lethal injection. Days later, his family and friends should have been picking up the pieces, moving on. Instead, they’ve been catapulted into a world so twisted and dangerous even the most ruthless among them would be stunned to discover the tangled web of deception, not only on the dangerous streets of South Florida but all the way to the top.

In this gripping follow-up novel to Nine Minutes, Out of Time takes readers from the sun-drenched flatlands of 1950s Central Florida to the vivid tropical heat of Fort Lauderdale to the halls of Florida’s Death Row as we finally learn the gritty backstory of Jason “Grizz” Talbot and the secret he spent his life trying to conceal.

Not even Grizz’s inner circle knows his full story—the tragedy that enveloped his early life, the surprise discovery that made him the government’s most wanted and most feared, and the depths of his love for Ginny, the tenderhearted innocent he’d once abducted and later made his wife.

Once Grizz’s obsession and now the mother of his child, Ginny has spent years grieving the man she’d first resisted and then came to love. Now remarried to Tommy, a former member of the gang, the pair have spent more than a decade trying desperately to live a normal existence far from the violent, crime-ridden world they’d once carved out on the edge of the Florida Everglades. For Tommy, especially, the stakes are high. Desperately in love with Ginny for years, he’s finally living his dream: married to the woman he never thought he could have. But even with the façade of normalcy—thriving careers, two beautiful children, and a genuinely happy and loving marriage—they can’t seem to put the past behind them. Every time they turn around, another secret is revealed, unraveling the very bonds that hold them together.

And with Grizz finally put to death, now Ginny has learned secrets so dark, so evil she’s not even sure she can go on.


Will these secrets tear their love to pieces? And how far will Grizz go to protect what he still considers his, even from beyond the grave?

I am trying to find the right words for this review without giving anything away if you haven't read it yet. I spent the last thirty minutes trying to figure out what to write and I've come up blank. I seriously just finished this book late last night/early this morning (because I have gotten behind on my reviews once again. But that's not the point and I'm going to apologize and say this is probably going to be a lengthy review and I hope I don't leave you bored.

I will admit I was one of those people whof jumped on the Nine Minutes bandwagon. I kept hearing people talking about it and hearing good things about it. So I bought it and wanted to read it right away. But it ended up just sitting in my kindle library for a few months unread. But finally a few months ago I finally found some time to read it. I had wanted to give it a raving five star review as soon as I finished, but found it late at night. So I ended up sitting on my review for almost a month and a half. Yes there is a point to all of this!!!!!! I found that more I sat on the review the more I kind of became disturbed with the book and really couldn't understand why there were all these raving reviews. And wasn't entirely sure I wanted to read Out of Time.

So when I had the chance to review this book I was wary about it. But there were so many unanswered questions left that I wanted to find out the answers to. So it was an honor to be able to review this book. Now that being said on with my review.......

Tommy or Grunt, whichever you want to call him by. I have very mixed feelings about him. I had liked him at the beginning of the first book, but than by the end I started questioning his motives. Now in this book I really wanted to give him a chance. But I found myself once again questioning everything he had done in the past. And I'm trying not to be mean but kind of found all of his motives of the past kind of disturbing. And found he was about as obsessed about Ginny as Grizz was.

So hopefully I haven't given too much away and hopefully I won't give too much away in this next part. I have to say I thought this book was so much better than Nine Minutes. In the first book I really felt a disconnect with that book. Yes I know it was mostly about the past and getting to know the characters, and knowing what had happened.  I don't know how to explain it but there was just something missing from the first book. In this book there was more dialog,  more interactions between the characters was I was happy to see. Yes this book is mostly about the present, but does hop back to the past so you know what was going on. Yes questions I had from the first book were answered.  There were so many lies, deceit, and betrayals from these characters it left your head spinning and leaving you with even more questions. The characters you thought you knew and maybe liked, you find you really don't know anything about them.

Geez this review is getting really long and again sorry about that. So I'm going to wrap it up. I really wanted to be able to give this book five stars, but once again something is holding me back. Did I see the ending that was coming? Maybe..... Was the ending predictably?  Probably..... Than aga in that was something that left me reeling that I didn't see coming.

So I'm only able to give Out of Time 4 out of 5 stars. And will warn you like the synopsis does this once again has a Cliffhanger ending. So if you don't like cliffy's than you may want to wait to read this. I now can't wait for the third book to come out!!!!

You can purchase Out of Time on Amazon and B & N


Disclaimer: I received an ARC of this book from TRSOR Promotions for my honest review. The opinions in this post are 100% of my own and may differ from others.
Posted by Busy Bumble Bee Book Reviews at 10:55 AM