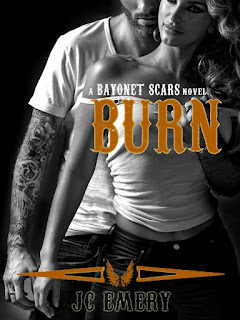 The blood of their enemies coats the leather of their cuts and a trail of bodies lie in their wake, but the Forsaken Motorcycle Club isn't done yet. Carlo Mancuso still needs to pay for his sins. Nobody knows that more than Ian Buckley, the Treasurer for Forsaken.

Ian prefers his pleasure mixed with pain and he's only ever at peace when he's doling out justice. Convinced that he's too unstable and sadistic to take an old lady, he keeps his trysts, like all of his relationships, brief and anonymous. But with his club at war, and the stakes being so personal, Ian's feeling the events around him more deeply than he expects.

Mindy Mercer is the sweet daughter of Fort Bragg’s most respectable cop. At least that’s how the town sees her. Very few people know the Mindy who hides her tracks and battles her cravings by lying to everyone around her. She thinks she has control of her addiction until she suffers an attack that leaves her searching for a way out of her own personal hell.

Mindy has never been more desperately in need of a savior and Ian has never seen a more beautifully destroyed creature in his life. Their attraction is intense, but their damage is extreme. Some scars never heal, and some people never get better.

Love is never more painful than when it can kill you.

You can purchase Burn on Amazon 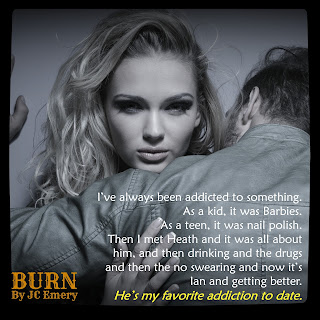 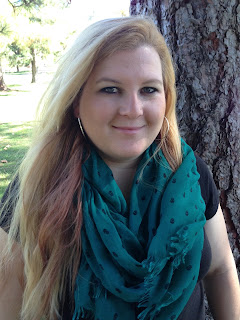 As a child, JC was fascinated by things that went bump in the night. As they say, some things never change. Now, as an adult, she divides her time between the sexy law men, mythical creatures, and kick-ass heroines that live inside her head and pursuing her bachelor's degree in English. JC is a San Francisco Bay Area native, but has also called both Texas and Louisiana home. These days she rocks her flip flops year round in Northern California and can't imagine a climate more beautiful.

JC writes adult, new adult, and young adult fiction. She dabbles in many different genres including science fiction, horror, chick lit, and murder mysteries, yet she is most enthralled by supernatural stories-- and everything has at least a splash of romance. 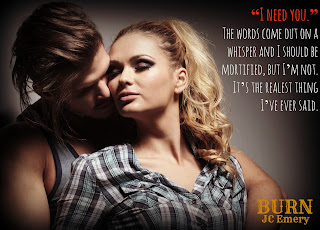 “I like talking to you. I want to get to know you.”

“What’s the point in getting to know me when you’re just going to end up hating me eventually, anyway?” This is why I don’t want to bond with her. I don’t want to let her in and to love her the way Ma does, the way Michael does. Even Ryan loves her and I’ll be damned if Pop doesn’t love her too. She’s squirrelly like that.

“I can’t hate you. If I can’t hate my father, then I can’t hate you either. I won’t ask you not to hurt him, and I can’t tell you how I’ll feel when he dies because I don’t know how I’ll feel. But I can tell you this— he stole you and my mother from me. My father hurt you, and he hurt me in a different way. He hurt Michael too, but he might be too proud to admit that just yet. Carlo Mancuso has his family and I have mine.”

She takes a step closer and reaches out, grabbing my arm. The tears she was holding back slide down her cheeks as she stares up at me.

“I don’t like violence and I hate to see people get hurt, but no matter who I am today, I was a principessa, a Mancuso. I understand the need for justice and deep down I know that this war goes back further than last year and that it was only a matter of time for my father to get what’s coming to him.”

“I don’t want to hurt you,” I find myself saying. My chest aches and my jaw is tight. I reject the emotions that make me weak and force myself to think about anything but how good it feels to get this gift from her. “Every year on your birthday, we have a party. It used to be just me and Ma, and then when Pop and Ryan came around, they’d join in. It was always just something we did. Ma never wanted to forget either of you, and she made sure I never could. I don’t want to hurt you, but I have to make this better for her.”

Principessa to the Mancuso crime family, Alexandra knows a thing or two about living outside the bounds of the law. Suffocated by the future her father has laid out for her, she makes a choice she can't take back, changing the entire trajectory of her life.

Thrust into the dark and dangerous world of the Forsaken Motorcycle Club for her own protection, Alex finds herself faced with the last thing she needs right now: the man of her dreams. He’s sex in leather, the devil incarnate, and one hell of a kisser. But he’s also off-limits. Ryan Stone can be her friend, but he’s forbidden to be her lover.

Third-generation Forsaken, Ryan knows nothing other than life on two wheels, and he wouldn’t have it any other way. He enjoys the many privileges that come with the patch, and the only laws he recognizes are the ones set-forth by his club. That is, until who he wants more than anything isn’t allowed on the back of his bike —or in his bed. Balancing his desire for her body, and need to keep her safe, Ryan tries to keep Alex at a distance. Finally having made a choice for herself, she’s done hearing the word “no” and will push boundaries even Ryan himself doesn’t dare cross.

Love is never more tempting than when it’s forbidden.

As a Lost Girl to the Forsaken Motorcycle Club, Nicole Whelan knows how to party. She’s not cut-out for relationships and her life is way too complicated for anything more than casual encounters. But one night when she falls into Duke’s bed at the clubhouse, he sees something in her that he can’t let go of—no matter how many times she tries to run.

Having been left to raise her teenage brother, Jeremy, she’s already got her hands full and isn’t looking for anymore complications. But Duke’s just watched his best friend fall for the only girl he couldn’t have, and then almost lose her so shortly after, shaking him to his core. Faced with his own loneliness, he’s more determined than ever to break down Nic’s walls and show her that he can be good for her; but he’s got a bad track record and she’s got a bad temper. Changing his ways isn’t easy when he’s not sure what he’s even changing for.

The violence and turmoil are at an all-time high, and Forsaken is in a vulnerable place when a twist of fate breathes new life into the club. It’s a much-needed beacon of hope for the embattled biker family, even if everyone’s not exactly on board. With Duke and Nic’s relationship already on shaky ground, and something even more important at stake, the Forsaken Motorcycle Club will fight like hell to keep their family together and whole.

Love is never more precious than when it’s new.

With the looming threat from the Mancuso Crime Family, the Forsaken Motorcycle Club is preparing for a war that could destroy them. Grady, the club’s Sergeant-at-Arms, knows that love makes you weak, and he has zero interest in adding to his liabilities– especially now. He’s already got his teenage daughter who keeps him on his toes and a beef within the club that could fracture his relationship with a fellow brother for good.

For Holly Mercer, her life is finally getting on track and the last thing she wants is trouble from her hometown’s resident outlaws. Keeping her nose clean is easier said than done, when suddenly she finds herself embroiled in club business. Holly might like the idea of being with a real-life bad boy, but even being in the same room with tough-as-nails Grady flusters her.

When Holly inadvertently finds herself on Mancuso’s radar, she has two choices: trust that Grady will protect her, or continue to refuse the club’s help. Both roads are dangerous, but only one has the chance to damage her beyond repair.

Love is never more dangerous than when it can destroy you.

Young love is always perfect. Until it's not.

Cheyenne Grady is a total daddy's girl to her bad-ass father, the Sergeant-at-Arms of the Forsaken Motorcycle Club. She's funny, and kind, and she just wants that deep, earth-shattering love like her dad has with her school secretary, Holly. But Cheyenne's been looking in the wrong direction, because the only good that can come from the way she looks at Jeremy Whelan is a lesson in heartbreak.

Jeremy always wanted to prospect for the Forsaken Motorcycle Club and wear the same patch as his father. When a life-long dream becomes reality, Jeremy realizes that the outlaw lifestyle is not for the faint of heart. Nor is it easy on relationships. He wants to be a good man, but temptation is everywhere.
Cheyenne is beautiful, and strong, and exactly what Jeremy could have forever. As long as he doesn't screw it up.
Love is never more powerful than the first time.

Posted by Busy Bumble Bee Book Reviews at 8:07 AM