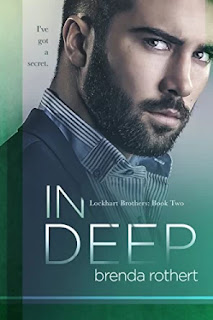 I’ve got a secret. No one knows how I blow off steam, and that’s how I like it. Most of the time, I’m happy just being part of a big family in a small town. And those times I need to get away are mine and mine alone. My secret stays safe until I meet her – the woman who simultaneously pisses me off and turns me on. She seems like a wallflower at first, but it turns out there’s a lot more to her than I realized. Despite her hidden strength, she has a vulnerability I can’t resist. As we open up to each other, I realize she’s starting to mean everything to me. She doesn’t feel the same way, but that won’t stop me from doing whatever it takes to keep her safe – even if it means exposing my secret to her. I’m in way over my head, and all I can hope is that someday, she’ll feel the same way about me.

So after reading the first book in this series I couldn't wait to read Mason and April's story. I liked both their characters in the first book. Especially April,  she was such a good source of support for Ivy in the first book and she seemed to have a story of her own. And we got to know Mason a little bit in the first book also, but you could tell there was more to him. Now that being said, on with my review.

Ahhhhh April, where should I start with her. As I said above I really liked her in the first book. She was a great friend and support to Ivy in the first book. But you could tell there was more to her and she had her own story to tell. I have to be honest here and say the first half of this book I was very frustrated with her. She just didn't seem like the same April we kind of got to know in the first book. Though she was the same sweet, caring,  nurturing person. She took something she heard from a conversation she heard between Mason and Reed, and held it against him for the first half of the book.  It wasn't until the second half that I feel she really opened up, that she became the April I liked again.

Oh Mason, you big hard headed sexy man. Even though we got to see him a little bit in the first book. I really liked getting to know him in this book. He's smart, sweet, caring, funny and all alpha male. He doesn't open up much to people, not even to his family. But once he does you can see what a sweetheart he is.

I really enjoyed this book. It was much lighter and funnier than the first. Brenda Rothert has a way that makes the characters come alive and enjoyable. I loved seeing other characters coming in this story from the first book and sense the bond between the brother's.

You can purchase In Deep on Amazon

Disclaimer: I received an ARC of this book from the author for my honest review. The opinions in this post are 100% of my own and may differ from others.
Posted by Busy Bumble Bee Book Reviews at 6:51 PM