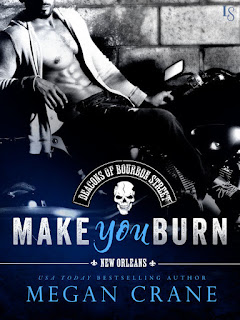 Meet the Deacons of Bourbon Street, bad boy bikers who are hell on wheels—and heaven between the sheets. Megan Crane revs up an irresistible new series co-written with Rachael Johns, Jackie Ashenden, and Maisey Yates.
Sean “Ajax” Harding’s oaths are inked into his skin. Once second-in-command of the Deacons of Bourbon Street motorcycle club, he left New Orleans to protect the brotherhood, and only the death of his beloved mentor, Priest Lombard, could lure him back. Walking into the old hangout gives him a familiar thrill—especially when he gets an eyeful of the bar’s delectable new owner. A wild ride with her is just the welcome Ajax needs. Then he realizes that she’s Priest’s daughter, all grown up and totally off limits.

Sophie Lombard loved her father, not his lifestyle. She’s done with bikers . . . until Ajax roars into town—arrogant, tough, and sexy as ever. And although he treats her like the Catholic schoolgirl he once knew, Sophie’s daydreams tend to revolve around sin. With the very real possibility of heartbreak looming, Sophie knows better than to get too close to an outlaw. But every touch from Ajax is steamier than the Louisiana bayou—and heat like this may just be worth getting burned.

Make you Burn is the beginning of a brand new MC series that author Megan Crane and several others are taking part in. I have to say this is the first time I have read anything from this author. I also have to say, as I usually do in an MC review, how much I love reading MC books. But there was something about this new series that caught my attention, besides it being an MC book. It might have been the fact that several other authors are going to take on these characters from the same series and tie them all together.

I really, really liked Ajax. I won't say love, because I'm not sure I reached that point with him. But Ajax finds himself back in his hometown of New Orleans after the President of his MC passes away. That is after being evidently exiled for ten years by said president. I do have to say Ajax is definitely all take charge  hot, sexy, alpha male.

I also have to say that I really enjoyed Sophie’s character. She's the daughter of the former president. She's also independent, strong, and has just enough sass. She can dish it out as well as take it.

This book was a really nice start to this series of the Deacons of Bourbon Street. I think the author did a really good job of making me feel like I was down in New Orleans while I was reading. I think the only thing that was a little disappointing was when the story line started to pick up at one point, where it seemed like their presidents death might not have been an accident. Than it kind of just dropped off. So that was the only big disappointment in this book. Not sure if that will be explored further in the other books or not. But other than that I thought it was really good with some smoking hot scenes.

You can purchase Make you Burn on Amazon, B & N and iBooks

Disclaimer: I received an ARC of this book for free  from Netgalley for my honest review. The opinions in this post are 100% of my own and may differ from others.
Posted by Busy Bumble Bee Book Reviews at 8:41 AM