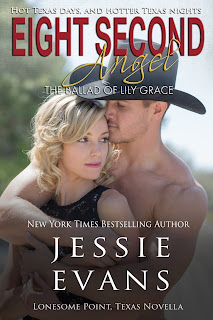 Love is heaven that hurts like hell…
Rodeo cowboy Canyon O’Donnell is a champion with more national titles than any pro bull rider in history. He’s also one week away from ending his own life. Haunted by mistakes from his past, Canyon isn’t looking for redemption, let alone love. But when a beautiful girl with her own tragic past practically falls into his lap, he can’t resist taking her under his wing. He can’t promise her forever, but maybe he can help ease her pain.

A little over a year ago, Lily Lawson was murdered. Now she’s back on earth in a new body, sent to redeem a lost soul before it’s too late. But her first good will mission is complicated by a powerful attraction to the tortured cowboy she’s been sent to save. Soon she wishes she could promise Canyon forever, but she only has a few days and time is running out.

Lily’s willing to do whatever it takes to save Canyon’s life. But what if the one thing he needs—her love—is the one thing she can never give?

Man oh man, where do I start with this review? Well let's just start with I think I have pretty much read the whole Lonesome Point series.  And I say think, because I think I have missed one book. And each and every time Mrs. Evans pulls you on an emotional roller-coaster of emotions in each and every story. And I just knew that this story wouldn't be any different. This book follows Lily and Canyon.  I was wondering how Mrs. Evans was going to bring Lily book to life since Lily has already passed on.

This book hit really really close to home for me. I don't want to make this about faith or religion or whatever you may or may not believe in. But I think as humans or maybe it's just me, but I think about the what ifs? The do spirits of passed ones really come back. The if I could just have one more moment to just say goodbye. What would you do?

oh Lily. I have to say that even though Lily is now inhibiting a different body, she is the same sweet Lily. She has been given the chance to come back to earth to help save another lost soul. But she also has her own agenda of saying goodbye to her family, especially her boy's who she didn't get the chance to say goodbye to. But she soon finds out that the short time she feels she has been away is actually longer.

I loved Canyon right away and my heart broke for him. He's sweet and caring. But just can't get over the guilt and death of his son. He doesn't feel like he deserves to live. I loved the moment at the end when it hits him like a ton of bricks, that yes, yes he did really want to live.

You can purchase Eight Second Angel on Amazon, B & N and iBooks

Disclaimer: I received an ARC of this book from the author for my honest review. The opinions in this post are 100% of my own and may differ from others.
Posted by Busy Bumble Bee Book Reviews at 8:56 AM