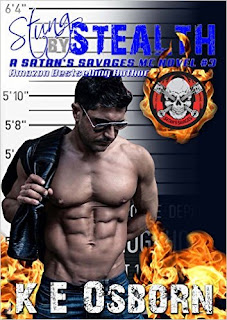 My name is Stealth. A man torn in two opposing directions. I'm an undercover cop infiltrating the Satan's Savages MC. My name is Skye. I'm a club girl. This is the life I know, but I long for something simpler. My name is Hannah. I am alone. The wife of a man who is never here, a ghost in the wind. Going undercover forced Stealth and Hannah into a separation. Their marriage left in tatters. Throwing himself into his new identity as Stealth - bad boy biker of the Satan's Savages MC club - plunged him straight into the arms of club girl, Skye. But with the Cartel on the club's back and danger at every turn, can Stealth truly turn on the brothers he loves. Will he give his Unit the intel they need, putting his career before his brothers? Will it be the club, Skye, or Hannah, who is Stung by Stealth?

After the ending of Heart of Steel, I couldn't wait to read this book the most. I had really high hopes for this book. I think most of my expectations were meet with this book. This one goes back to the roots of the first book in darkness. I almost want to say that this book is even darker.

Alright so I want to say I loved Stealth or FIM whichever you want to call him. I really really wanted to like him. But to be honest I kind of have mixed feelings on him. On one hand here's a guy who's a cop who has gone undercover to infiltrate the Satan's Savages and bring them down. He's starting to have mixed feelings between being loyal to his job and being loyal to the club. There were times I understood where he was coming from and the decisions he made with protecting his family..... But at other times I kind of found him to be a douche canoe. I mean I know he's separated from his wife, but he hasn't seen his kids. Again I understand that he was just protecting them while undercover.

I want to say I liked Stealth and Skye together and at first I did. But than I realized that maybe there wasn't really a connection between them when I thought there was. I think Skye was more invested in what they had than Stealth was. I think for them it was a thing in passing.

As I said above this book was a bit darker than even the first one. In this book there's loss, loyalties are tested, member's are changing, people are losing their minds. I really don't want to give any spoilers away on the end. But lets just say I can't wait to see where this series goes. And I really need more Techie!!!!!

Disclaimer: I received an arc of this book from iScream Book Promotions for my honest review. The opinions in this post are 100% of my own and may differ from others.