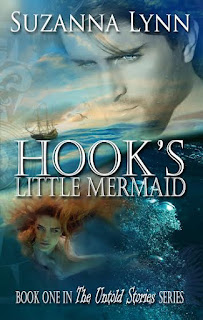 Captain James Hook was once a good man trying to make a somewhat honest living. He is a pirate, after all. However, after getting word that a boy named Peter Pan played a part in the death of a dear loved one, Hook makes it his sole purpose to hunt down and destroy the fiend.

On his journey for vengeance, the captain encounters many new comrades, including a young girl named Red and a fairy called Tinker Bell, and both push him to reconsider his desire for justice.

The accidental rescue of a mermaid leads him on a whirlwind adventure in Neverland. The journey is not a simple one, considering Pan, the Lost Boys, mermaids, and magic all come into play. After several misadventures, Hook must choose between the possibility of a new life with love and his much-desired retaliation against Pan.

Once everything is said and done, will the captain be able to overcome his need for revenge? Will he let compassion steer him toward love? Or will Captain Hook live up to his villainous reputation?

I will start by saying that this is the first book I have read by Mrs. Lynn. I have always been fascinated with Peter Pan and even Hook. This book is as much Fantasy and Fairy tale, as it is should I dare say Fan Fiction. In this book we get to see a different side to Captain James Hook.

Captain Jameson Shaw is out for revenge on Peter Pan. James is on the hunt for Pan for the death of his son. I really liked Hook in this book. I thought even though he was a pirate, I thought he was sweet (at times) and caring (at times). I liked seeing him wanting to help people out at times.

I can't say there was really a love interest until towards the end of the book. The author does wonderful job of weaving together different lands and taking us through them. I kind of feel this book was kind of a twist on Peter Pan and the Little Mermaid mixed together.

This book was probably one of the lightest reads that I have had in awhile. By that I mean it was mostly just a tale and journey that Jameson Shaw was on. There really was no romance in it, though you could tell something was brewing.

I'm giving this book 4 Stars Out of 5 and would recommend it to anyone loves fantasy/fairy tales and it would be very suitable for younger people!!!!

Disclaimer: I received an arc of this book from the author for my honest review. The opinions in this post are 100% of my own and may differ from others.