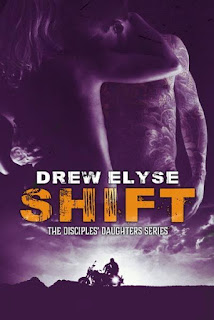 After the death of her father, Ash learned an important lesson: being a Disciple is dangerous. The club her father had loved, the club that had been their family, took him from her. She couldn’t stay and wait for the day it would take the man she loved from her, too. So, she left. Now, she’s the one in danger, and the Disciples are the only ones that can keep her safe. She has no choice but to return to the club and the man she left behind. A Disciple will fight like a savage for what is his.

Sketch has what he needs: his tattooing, the club, and his bike. Anything else would require a heart, and his was ripped out of his chest a long time ago. It wasn’t coming back. At least, not until she did. His heart isn’t the only thing Ash brings with her, though. She has a daughter. A daughter old enough to be his. A daughter Ash claims might not be. But in his heart, Sketch knows the truth. That little girl is his… just like her mom.

This biker knows one thing: a Disciple’s daughter’s return is about to make his whole world shift.

I really liked Ash in this book. Ash finds herself and her daughter heading back to the Savage Disciples, after she left them after the death of her father. Ash has dealt with a lot since she has left the Disciples and she's carrying a secret. After returning Ash learns some truths that she didn't know about with her fathers death and with her mother.  I will say that even though I liked Ash, there were times I found her to be very stubborn and wanted  to jump in the story and shake her. But I understood where she was coming from with her secret and I felt like I connected with her. And she is definitely my favorite of the series.

I loved Sketch..... Gabe or Sketch as he goes by has been through a lot in the past few years, he lost Ash after her fathers death. Than his uncle Gunner died a few months later. Now he's closed off and sort of hard headed. I loved watching him open up again and I loved watching him with his daughter.

Disclaimer: I received an arc of this book from Love Between the Sheets for my honest review. The opinions in this post are 100% of my own.

Posted by Busy Bumble Bee Book Reviews at 10:26 AM