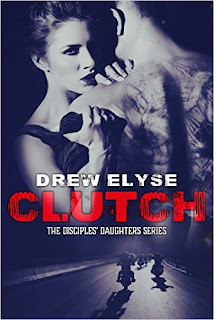 Once a Disciple, forever a Disciple. Cami was born into the Savage Disciples MC, but she ventured out to build a life of her own away from the club. She’s engaged now, living a new life despite missing the bikers that raised her. Overall, she’s… fine. Sure, fine. She’s fine with the fiancé who is more interested in position and image than the woman in his life. She’s fine with the fake people around and the suffocating passive aggression. She’s fine with the fact that she is turning to drugs to self-medicate. A Disciple will fight like a savage for what he wants. When Gauge tags along to visit his club brother’s daughter, he can’t believe the two women he meets: the fiery daughter of a biker and the puppet with the blank affect. And yet, they’re both Cami. He sees the fire beneath surface, and he wants to watch it burn. He wants to rip away the man smothering her like a wet blanket. He wants to see the flames consume that cookie-cutter future-wife facade to the ground and dance with her in the flames. When this biker clutches onto a Disciple’s daughter, there is no letting go.

I have to say Mrs. Elyse is a new author to me and I love finding new author's. And of course I love finding new MC books. This book sounded interesting and I was hoping it was going to be. I think this book had real potential. But I felt like the story-line or the story moved a little to quickly to my liking. I'm not sure if that's because the author was just getting her feet wet in the MC genre or not. But I will say that the author had a nice start to the series and a glimpse into the Savage Disciples.

Now that being said...... I want to say I liked both Cami and Gauges character's. But I'm not sure I liked their character's together. Cami and Gauge meet when Gauge goes with Cami's father to visit her. After meeting they evidently have a back and forth on the phone, through calls and text messages for a while and kind of have an instant connection. Now I don't have a problems with insta-connection stories. But I just wasn't feeling it for this story or for Cami and Gauge's characters. I didn't feel the connection between them. It didn't really seem believable to me.

I also kind of felt like their were some issues between them that were solved way to quickly for my liking. But other than that I liked getting to know them.

Disclaimer: I received a copy of this book from Love Between the Sheets for my honest review. The opinions in this post are 100% of my own and may differ from others.

Posted by Busy Bumble Bee Book Reviews at 9:55 AM