GP2 race car driver Dustin Coates has been made irrelevant…
For the past year, Dustin helped his best friend, Raine Wilkins. It was a good diversion from his twisted life. Now she’s settling down with his brother, and without the distraction from his own toxic relationship, Dustin is rapidly spiralling out of control.
Everyone warned him to leave his girlfriend, Elora, yet they knew nothing about the baby…
It’s up to Dustin to protect the innocent life hanging in the balance, and to do that he must endure Elora’s twisted games of manipulation and violence. However, when she does the unthinkable, Dustin finally snaps. Leaving her, the light-hearted jokester people have come to love is replaced with a grief-stricken man intent on one thing—earning a Formula One contract.
Everything changes when Tazia Nixon moves in next door…
Dustin clings to the Latin beauty who soothes his aching heart and helps him forget. But beneath her eternal optimism is a distressing past she refuses to share. Dustin must decide if he can risk his fragile heart a second time. She might ease his pain, but she could also break him like no one else.
Will Dustin be able to overlook the deceit to find his forever with Tazia, or will he see nothing more than a Twisted Mind? 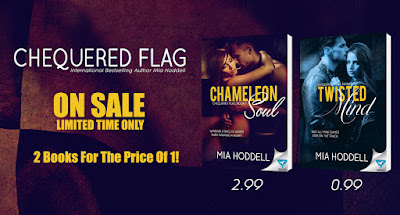 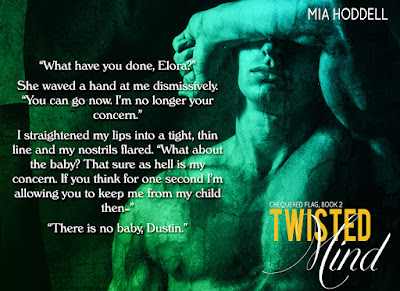 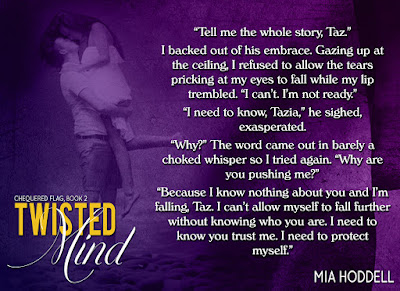 I leaned in, desperate to feel him.
Finally, his lips grazed mine in barely a whisper of a touch.
A moan of protest slipped from my lips when he parted and the musical sound of Dustin’s husky laugh caused me to shiver.
“We shouldn’t be doing this,” he murmured, shocking me when his lips scraped my ear.
“I really don’t care.”
Dustin cupped my jaw, his thumb swiping over my cheekbone. The touch drew my eyes to his.
“I should though.”
I rested my head further into his palm and covered the back of his hand with my own to keep him there. Turning, I pressed my lips to his palm. “What’s the worst that could happen?”
“You could break me.”
I nipped at the tip of his finger when he trailed it over my bottom lip. “Aren’t we both already broken?”
“You could shatter me like no one else, Taz.” Rather than meet my eyes he stared off into the distance over my shoulder. “You could destroy me.”
I reached up, taking his jaw between my fingers and forcing his attention back to me. “I don’t want to.”
“That doesn’t mean you won’t.”
“No, but it means I’ll do everything in my power to try not to.”
The resolve in his eyes wavered. He couldn’t meet my gaze for long. He exhaled heavily, and his jaw kept tensing beneath my palm.
“Dustin,” I said, drawing his focus back to me. “It’s only a kiss.”
It wasn’t. We both knew I was lying and if we started down this road it would lead to more.
Regardless, Dustin pulled me into him. Pressing on the small of my back, he didn’t stop until I was flush against his chest. With his other hand he swiped back a lock of hair to slide it behind my ear.
He lowered his head, dipping until his forehead rested against mine. “I’m trusting you, Taz.”
I responded in a whisper, “Me too. You’re not the only one who stands to lose, Dust.”
Finally, he closed the gap between us and his lips met mine slowly, but forcefully. He claimed and possessed me, marking me as his with his mouth.
Every ounce of pain and fear was shared through our kiss.
When I parted my lips Dustin’s tongue immediately swept into me. I moaned, raising my arms to encircle him. I ran my fingers through the shaggy locks of hair at the back of his neck, pulling on them until he grunted against me.
Even though no space remained between us, Dustin forced me against him harder then dropped his head to my shoulder. He placed a tender kiss directly over the pulse point in my neck and mumbled against my skin, “Please don’t break me, Taz.” 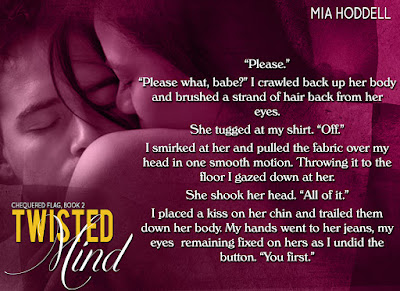 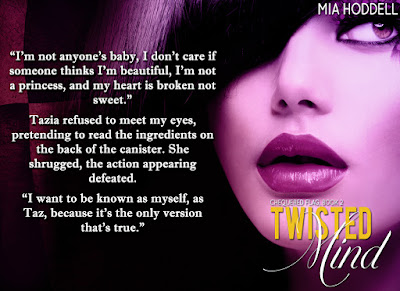 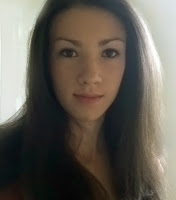 #1 Amazon bestselling author Mia Hoddell lives in the UK with her family and two cats. She spends most of her time writing or reading, loves anything romantic, and has an overactive imagination that keeps her up until the early hours of the morning.  Mia has written over ten titles including her Seasons of Change series, the Chequered Flag series, the Elemental Killers series, and her standalone novels False Finder, Not Enough, and Bet On Me.
Her favourite genres are contemporary romance or romantic suspense, and with an ever growing list of ideas she is trying to keep up with the speed at which her imagination generates them. She also designs book covers on her website M Designs. 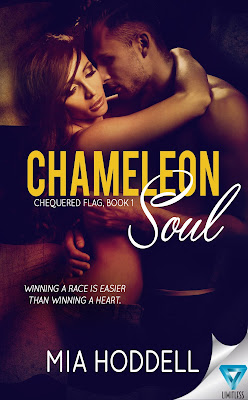 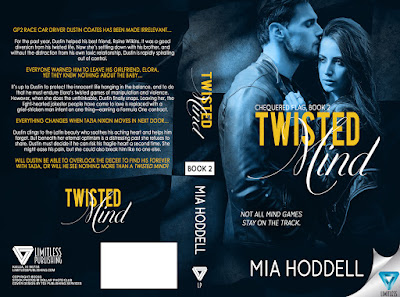