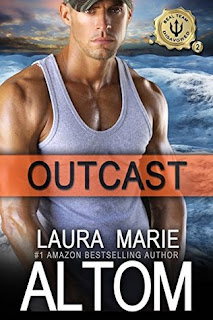 When disavowed Navy SEAL, Jasper King, receives this cryptic message from Eden Marabella, an English lit professor he's fallen hard for, he's out of his mind with worry. Her behavior was already odd when she dumped him right before heading for Antarctica, but his every protective instinct kicks in when he takes her words as a cry for help.

Eden harbors a heartbreaking secret she never wants Jasper to know, which is why she followed her biologist father to his Antarctic research station. Upon her arrival, she expects to reflect on the cruel hand she's been dealt, only to discover dozens of dead Orcas washed along a lonely stretch of shore.

Jasper is also hiding secrets he'd rather not face, which is why he doesn't think twice about calling in a favor from his boss at Trident, Inc. Protective Services to arrange transport for him to the South Pole. Upon his arrival at the station, Jasper finds Eden's actions stranger than ever until realizing he's stumbled upon a nightmare far bigger than he'd ever imagined.

Eden's father is missing, and she's been taken hostage. The demand for her release? She must reveal the location to a vast Nazi treasure vault. But how can she do that when not only has she never heard of it, but she has no idea where it could be?

Will Jasper and Eden put aside their differences long enough to find the treasure and save her father? Or will they both be killed by maniacal fortune hunters or worse yet, the brutally cold and treacherous environment?

Gah Mrs. Altom what are you doing to me? Look I have been a fan of Mrs. Altom's  ever since I read one of her Harlequin books. But ever since I heard of these SEAL team books coming out I couldn't wait to read them. Unfortunately I haven't read the first one in this series yet. But let me tell you I have a thing for Military Romance books, especially SEAL's. So when I got a chance to review this book let me tell you I thought it would be a smart idea to start it late at night. I mean I've done that plenty of other times with other books. Boy oh Boy, I should have just waited to start this book the next morning. This book pulled me in from the beginning and held my attention till the very end. I couldn't put it down once I started an stayed up reading until late into the night.

I really enjoyed Eden's character. I thought she was sweet and caring. Eden finds herself in Antarctica at her father's research station harboring a secret about her health. Which had caused her to break up with Jasper and basically to run off and hide. Though while she is at the research station things go from being fine to turning dangerous very quickly. Eden finds that not only does she have her own secrets, that there are other's that have secrets also.

I loved Jasper right off the bat. He was sweet, caring, protective and also had his own demons resting on his shoulders. Jasper finds himself chasing Eden to Antarctica after receiving a cryptic message from her and trying to find out why she suddenly broke up with him. What he doesn't realize is that he is quickly going to be thrown into a life and death situation with Eden.

I loved seeing Jasper and Eden together and the banter between them. I thoroughly enjoyed this book, as I said at the beginning of this review this book pulled me in from the very first line to the end. I'm not sure what I expected from this book, but it wasn't what I got. Not that, that is a bad thing. This book was suspenseful and intriguing. Mrs. Altom spins a wonderful tale of an world under the Antarctic ice.  She kept me guessing and wondering who the bad guy was through out the whole book.

I'm giving this book 4.5 Stars out of 5 and am now going back to read the first book!!!! And can't wait to read the next book Shunned!!!!

You can purchase Outcast {SEAL Team Disavowed Book 2} on Amazon US, B & N, and Kobo

Disclaimer: I received a copy of this book from the author and/or publisher for my honest review. The opinions in this post are 100% of my own and may differ from others.