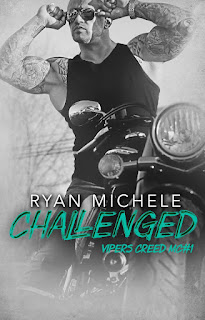 Well where can I start with this review? I guess I will start with author Ryan Michelle has another hit on her hands. If I hadn't have been a fan of her MC books already, I think this book would have definitely pulled me to be a fan.

Uh I absolutely loved Spook. I have to say he may be my new favorite out of all of Mrs. Michelle's male characters. Which is hard for me to say considering Gage has always been my favorite. But Cade 'Spook' Baker definitely gives him a run. It may be a tie between the two. You could tell right off the bat how much he stilled cared for Trix and tell the attraction was still there between the two.

I have to say I'm already loving this new series and these new bikers. There were definitely some moments I didn't see coming (I don't want to give anything away). I thought the story flowed very well and I really enjoyed it. As I said at least for me it took some time for me to warm up to Trix, but once I did I really enjoyed her. There were definitely some interesting characters in this book.

Disclaimer: I received an arc of this book from the author for my honest review. The opinions in this post 100% of my own and may differ from others.
Posted by Busy Bumble Bee Book Reviews at 8:31 AM