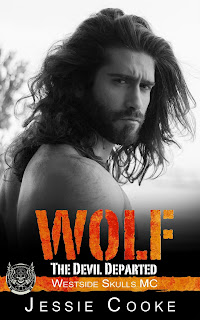 Starting over is never easy...especially after your heart has been broken. Wolf never wanted to be one of those guys that collected club girls, or chased every skirt he saw. All he ever wanted was one woman to love fiercely, and a family to take care of and protect. But sometimes no matter how much you want something, or how hard you're willing to fight for it, fate and karma have other plans.

Blair works with some of California's toughest criminals. She's a psychologist who follows former inmates back out into the community, and makes recommendations for their futures based on their current situation. It's her job to decide if they are likely to reoffend...and often her decisions make her less than popular with some very dangerous men. When one of those men decides he wants to get even with her, she finds a group of unlikely heroes in a motorcycle club that's been wronged by him as well.

Something about the president of the MC appeals to her in a way that makes her question everything she ever believed and the fine line that some people draw between good and evil. Is it possible for a woman who has dedicated herself to upholding the law, to love a man that has dedicated his to walking a tightrope in between?

Wolf is struggling to start over. He lost someone that he cared for deeply and that left his chest with a deep, empty hole. When he meets Blair, the prison psychologist rescued from the clutches of an evil man by Wolf and his club, he begins to wonder if it's possible for him to love again...but before he and Blair can even begin to figure things out, Wolf is arrested for murder and it starts to look like there's no hope for the future for the freshly arrested inmate and the traumatized psychologist who just might not be able to trust or believe in a man like Wolf Lee.

This is a Standalone Romance Novel but characters from this story, will appear in future books in the series.
HEA and No cliffhanger.
Intended for Mature Readers.
* * *
The Westside Skulls MC Series is about members of the MC club, their friends and associates.
Each story, while focused around one main character, is not necessarily about a Westside Skulls club member, but the story is related to Skulls members and the club.

So we finally get the second half to Wolf's story. But the big question is will Wolf finally get his happily ever after? I have to admit after the first part of his story I couldn't wait to dive into this second part.

I really liked Wolf in the first book. But I fell for him in this second book. In this book Wolf is a man that is trying to put his life back together after the betrayal of his wife or ex-wife.  I felt like we really got to know him better in this book. And he definitely seems to being doing better after he starts to get to know Blair after saving her and getting to know her. But he still had forces working against him. I thought that Wolf was sweet, kind, protective, and caring in this book.

I really liked Blair. I thought she was sweet, kind, and kind of kick ar$e in this book. She definitely knew how to take care of herself.