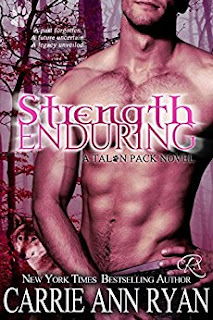 In the penultimate novel of the Talon Pack series from NYT Bestselling Author Carrie Ann Ryan, an Enforcer must make the ultimate choice when it comes to a human woman with a secret she doesn't know she holds.
Kameron Brentwood has only one thing on his mind: defeating the enemy. He doesn't have time for a human woman who sets his teeth on edge and makes his wolf prowl. It shouldn't matter that she's his mate because he's always thought that mating is a distraction. Yet as soon as he gets to know the woman, he figures out that there's no hiding from the attraction he feels for her.
Dhanielle Coburn has always been on the outside looking in when it comes to the Talon Pack, but she's not about to let fate and the moon goddess decide her path for her. If and when she takes Kameron as a mate, it will be her choice. Yet when she suddenly finds herself in the Pack's inner sanctum, deeper than she ever thought possible, she has to fight not only her need for the man in front of her but also a hidden secret about her family she didn't even know she had.
When the choice is pulled from both of their hands, the two will need to learn who they are apart, and who they can be together. Because there's more to mating than a mark and a prophecy that has come back to haunt them. And even though they may be fated, the ultimate sacrifice just might take them both in the end.

Hmmmm I'm really trying to think of words to put down for this review. I think that this is the first time in a long time that I have struggled with coming up words for a review. And I don't mean that in a bad way or that the book wasn't good. Far from that.....

Lets start with Dhanielle, aka Dhani. She of course is one of the human friend of Dawn and Aimee (and you probably know that if your following along with this series). But she's a young woman who has been experiencing dreams that she can't explain. She's gotten fired from her job, because of her association with the Talon Pack. Oh and she's mates with a grumpy enforcer. I really liked Dhani throughout this book and I even felt for her and her parents, for everything her grandmother robbed them of.

Ahhhh Kameron, aka Kam. He's the enforcer of the Talon Pack, the one who protects his family. He also likes to think of himself as a grumpy ar$ehole. Though I didn't think of him that way at all. I just thought he was sweet, kind, firece, and protective.

Even eight books in I still find this series to be enjoyable.