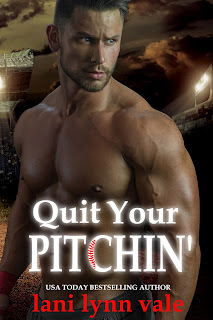 What’s wrong with my butt?

She means those words to be directed toward the woman beside her, not him. But he can’t stop himself
from answering. Not when her ass is the most magnificent thing he’s seen in his life.

Apparently, answering her with ‘not a damn thing’ wasn’t what she was expecting.

She likely wasn’t expecting the baseball she took to the face at his next at bat, either.

All it takes is one ill-fated foul ball, and George Hoffman, Lumberjacks center fielder, falls head over
heels in love with Wrigley Field—and yes, that is her real name.

From that point forward, George and Wrigley fall into a fast whirlwind love that ends with them eloping
to Vegas. And he has his potty mouth, titty bar owning, pain in the ass grandmother to thank for it.

Not that he’s complaining or anything.

Who wouldn’t want to be married to a woman that made his heart race like he was in the final game of
the World Series?

The only problem is trying to convince her of that.

Well the second book in the There's No Crying in Baseball series has finally arrived. And it feels like its been a long time coming. I mean it has been a while since the first book came out about a year ago I had to reacquiant myself with these characters.

I mean liked Wrigley also. Just like George she was handed a sh*t hand in the family department, except for her sister Diamond. I also felt for her in how she lost her mother. Its something that's near and dear to my heart so that made me feel a bit connected to Wrigley's character.

Ok so I will say I was a bit confused at the beginning of the book with what was going on. Than I realized that Mrs. Vale was trying to give us a look into what George and Wrigley's life had been like. I like watching them put their relationship back together. I did enjoy both parts of the book and as mentioned I did like Wrigley and George.

Posted by Busy Bumble Bee Book Reviews at 8:51 AM