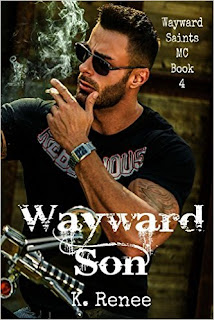 Collette Kindrick is running. On her anniversary, she caught her boyfriend sleeping with someone else. Heartbroken, she packs just enough to get by and runs to the city that never sleeps.

A chance encounter brings her into Dominic’s path and she falls head over heels for the biker. Dominic Davoli has had his life planned out since her was born. He is destined to be the next Wayward Saints president. Meeting Coley was never part of his plan, but, once he’s had her, he can’t let go.

One wrong move lands Dom in jail, threatening everything he is trying to hold on to.
Will their differences tear them apart, or will Dom claim Coley as his ole’ lady and keep her in Vegas with him?

I feel like besides Cason's book, that Dom's book is the one I have been looking most forward to in this series. I will say this before you read this book, some of  this story takes place before Wayward Beginning. So you maybe a little confused if you haven't read that or any of the other books.

I love Dom, have loved him from the beginning of the series. He's been the older mysterious brother that we have seen pieces of throughout the series. But just haven't really gotten to know yet. You can tell how much Dom cares about his family, friends and club. But in this book I think we get to see an even softer side to him.

I liked Collette. After leaving when she finds her boyfriend cheating on her. I found Collette to be sweet, caring and funny. I will say she did seem to be very accepting of everything thrown her way, with her ex, with Dom.

I thought this was a good read and we got to know Dom better and of course got to know Collette. I will say this though it kind of seemed like we got to see Dom and Collette deal with all of Dom's stuff. But I kind of felt like all of Collette's stuff was pushed to the side. But other than that it was a good read.

Disclaimer: I received an arc of this book from the author for my honest review. The opinions in this post are 100% of my own and may differ from others.
Posted by Busy Bumble Bee Book Reviews at 7:52 AM