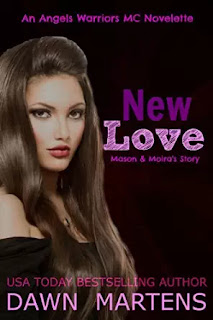 Mason ‘Reaper’ Harris recently lost his wife under tragic circumstances, leaving him to care for a newborn son on his own. Mason doesn’t do hearts and flowers. He has all but given up on love until he meets the nurse who worked in the NICU while his son was there. Fighting his growing attraction to Moira, he feels guilty, believing he doesn’t deserve a second chance at love.
Moira Parker has worked hard to achieve her dream job as a nurse. It’s there that she meets the man of her dreams, Mason. However, he just lost his wife, and she feels wrong for desiring him. Brought together by his grief, Moira shows Mason his life is just beginning.
This is the untold story of how Mason found new love

So have to say with the way that UnBreak this Heart ended I wasn't sure if there would ever be a HEA for Mason. I mean yes at the end of the book we catch a glimpse of his HEA. But it made you wonder how it happened.

Oh boy Mason was definitely being himself in this book. Still so angry at everything and everybody. I mean I get it and understand it with losing Hilary. But you also get to see a different side of him to.

I think Moira was the perfect match for Mason. She definitely take anything Mason gave to her and she she gave back as good.

I was glad to see all of the Angels Warriors gang in this book. I found my heart breaking for Mason at times. Of course like with the other books in this series there's no lack of drama.

You can purchase New Love on Amazon

Disclaimer: I received an ARC of this book from for my honest review. The opinions in this post are 100% of my own and may differ from others.
Posted by Busy Bumble Bee Book Reviews at 7:18 AM