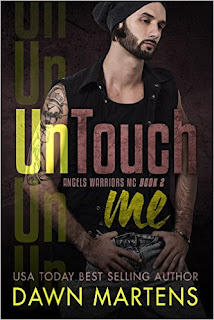 **WARNING** you MUST read UnKiss Me before UnTouch Me!! The truth always comes out, no matter how deep you try to bury it. Secrets never make their way to the grave. Lilly Mayer has always lived a simple life. She’s loyal—maybe too loyal since faithfulness cost her the love of her life. Keeping Eden’s whereabouts a secret from everyone, including Vinny, has ripped away Lilly’s future. Vincent “Zippo” Torino knows he’s a goddamn bastard. And he’s willing to use Lilly’s loyalty to Eden as his own escape from a hell he created. He doesn’t give a damn that he’s leaving the woman pregnant with his child behind—not when he has to protect his own destructive secret. And not when he’s sure she’s going to beat him to the punch and leave first. As the dangers to the club escalate, nobody’s hearts—or lives—are safe.

As other reviewers have said UnTouch Me is the second book in the Angels Warriors MC Trilogy. If you haven't read UnKiss Me than you will probably be confused with the characters and what is going on. UnTouch Me is Lilly and Vinny's story.I have to say Vinny and Lilly my be my favorite characters in the Angels Warriors MC trilogy. But I'm just not certain they are right for each other.I have to say I liked Vinny in the first book. Sure he seemed angry and was being kind of an ar*e to Lilly. But at that time I still liked him. But in this book gosh Vinny was an a** in the book. I'm sorry but cheating is cheating, whether you're with someone or not.I definitely think Lilly is my favorite in this trilogy. I really felt for her and was amazed by the strength of her friendship. I understood how she felt about Vinny's other child.After reading the first two books in this trilogy, I'm starting to really question these couples. I'm not sure any of them really belong together. I mean sure on the outside they look like they belong together. But they are keeping secrets from each other and than getting mad at each other for the lie. Again I liked most of the characters.I'm giving this book 4 out of 5 stars!!!!

You can purchase UnTouch Me on Amazon
Posted by Busy Bumble Bee Book Reviews at 6:53 AM