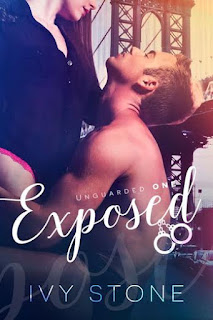 One explosive encounter brought them together. One infatuation led to a love like no other. One secret tore them apart.

As head of the NYPD Organized Crime Control Bureau in Manhattan, Chief Detective Mason Cole walks in the line of fire every day. Between dodging bullets and braiding his daughter’s hair, Mason is tormented with haunting memories that refuse to relinquish control over him, no matter how hard he tries. After a bust gone wrong, he’s thrown for a loop by a woman who will fill his life with more chaos than ever before.

Lindsey Jenkins is a self-made woman. Bold and independent, she lives unapologetically in a life of deception. That is until her facade is threatened by a force stronger than anything she’s ever felt before—love.Leaving their hearts unguarded could lead to destruction. Even worse, it could expose them both to a war they never saw coming.In a city coerced by corruption and treachery, what happens when your greatest passion becomes your biggest weakness?

As a blogger but mainly just as a reader I love finding new authors (At least new to me) and new books. And Mrs. Stone is actually a new author to me. I haven't read any of her books and I thought this one sounded interesting.

I really liked Mason's character. He's dealing with raising a daughter on his own, after his daughters mother passes in a accident. He has a job that dangerous most day's. And he's an all around s#xy alpha male.

I thought Lindsey's character was alright. She had her moments (again at least for me).  I felt for her and her sister, I really did. It was obvious they hadn't lived the easiest life's after their father passed away and their mother turned to drugs. I times I thought she was strong and tough. But at times her attitude turned me off.

I thought that this was an enjoyable book and the story flowed well. I guess I wasn't sure what to expect with this book and the synopsis only gives you a little clue. At times I kind of felt confused as to what was going on, especially at the beginning. But I think it became more clear after a few chapters.

You can purchase Exposed (Unguarded One) on Amazon

Disclaimer: I received an ARC of this book from Love Beneath the Sheets promotions for my honest review. The opinions in this post are 100% of my own and may differ from others.
Posted by Busy Bumble Bee Book Reviews at 7:44 AM