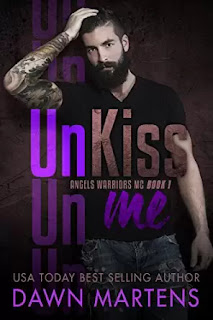 *Warning* The books in this series can NOT be read as a standalone! After spending years suffering abuse at the hands of her father and protecting her baby sister, Eden Blake takes a chance. She calls on the Angels Warriors MC asking for protection just months before her father is to be released from prison. She never expected that call would bring her face to face with her past. Jasper ‘Angel’ Hughes, President of the Angels Warriors MC, battled his way to the top. He fought his way through hell, cleaning up the mess that was once Satan’s Law MC. Wanting to serve a better purpose in life he took on the role of child protector. Protecting them from their hellish lives and getting them away from their abusers. When he gets the call to protect Eden, the first girl he ever loved, he vows to win her back and never let her go again. But when a new secret comes to light that Eden was hiding, will they get their Happily Ever After?

My Review:
I have to say I have heard a lot of things about this book and this series. This is one of the many books I have been wanting to read since it first came out. But haven't had the chance to read because of my heavy reading load. But I finally got the chance to give it a read.I liked Jasper. I liked that he turned his MC around, and I liked what him and the MC were doing for children. I have to say the the only downfall to him was the secrets him and Eden were keeping from each other. Do I understand why he reacted the way he he when he found out he had kids? Yes..... Do I think he handled it better? Maybe.....I had mixed feelings on Eden. I mean I did feel for her and everything she had been through. I even understood why she kept her and Jasper's kids a secret. But at the same time I think it all comes down to secrets and misunderstandings from both parties.I enjoyed this book and liked the plot. I thought it had a nice flow to the story. It kept me on the edge of my seat. I liked most of the characters in this book. This book has a little bit of everything in it.I'm giving this book 4 out of 5 stars!!!!!!

You can purchase UnKiss Me on Amazon

Posted by Busy Bumble Bee Book Reviews at 6:53 AM