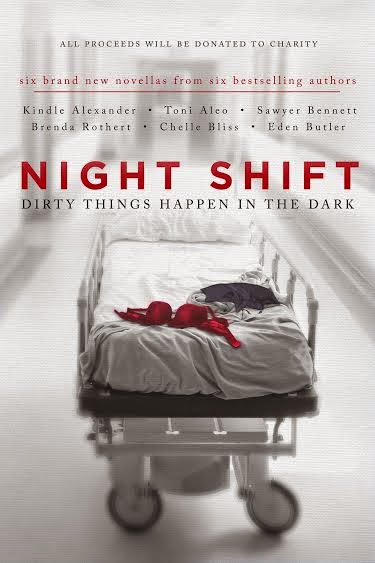 
Summer in the Big Easy is hot.

Inside Tulane Medical Center the temperature is on the rise.

Six never before released stories that will leave you breathless.

Dirty things happen in the dark.

A member of the New York Fire Department, single father Tim Davis is about as tough as they come. But underneath the muscles and tattoos, he still nurses a bruised heart handed to him courtesy of his first love. While on vacation with his son in New Orleans, Tim runs into the very woman that taught him about love before pulling it all away.
Holly Reynolds is rebuilding her life as an orthopedic doctor, far away from her home in New York City and her controlling father - the man responsible for tearing her and Tim apart. While she knows the hurt she caused Tim could never be forgiven, she can’t help the overwhelming feelings she still has for her first and deepest love.
Truths are revealed as lies are exposed.

After losing the love of his life to another man, Flash is heartbroken and lost.
Wanting to forget, he heads to New Orleans. He finds the unexpected.
A chance encounter could alter his fate or will she become his rebound?

Jordie Thomas is looking for something to take his mind off of the woman he let go—or rather, pushed away—and the terrifying prospect of what will happen if his broken leg doesn’t heal. He’s ready to get back to his family and fellow teammates on the Nashville Assassins and get back onto the ice. However, with his injured leg in the way and his mind clouded by a certain woman, he needs a break to clear his head and his heart. With New Orleans in his sights, can this player find a way to get back to the crazy and reckless life he used to live? Find out as author Toni Also takes readers on a wild journey in this Assassins novella.

Dr. Derek Babineaux is intelligent, dedicated, and one of the best ER physicians in the fast-paced world of critical care at TMC. Always on top of his game, he’s thrown off balance when the newest staff member unleashes his hidden desires.

Justin Delacroix’s job at the inner city’s busiest hospital might be just what he needs to ease back into civilian life. There’s only one problem, his attraction for one sexy ER doctor is off the charts, but he has reasons for not returning Dr. Baby’s advances. Or maybe he doesn't.
.
Healing Touch
Brenda Rothert

She spends her nights treating patients, but Dr. Jocelyn Drake’s own wounds are unfixable. A fierce determination to continue her research project and a shred of remaining pride keep Joss from transferring out of the Big Easy.
Carson Stephens recently returned from a tour of duty in the Middle East, and now his closest companion is loneliness. His night-shift work supervising the electrical and mechanical systems at the hospital is a perfect fit – it’s solitary work putting broken things back together. If Carson has his way, his hands will work their magic on more than the wiring, and he’ll show Joss a night of passion that restores her shattered confidence.

Neil Ryan was a good Navy SEAL. He was an even better detective, but when an unmarked envelope lands on Ryan’s desk, long-buried secrets are resurrected and Ryan questions everything he thought he knew about justice, including who killed his mother.
Now he’s chasing a ghost, swimming in the shadows of the past, searching for answers. Ryan lands in America’s wildest, sexiest city tangling with a redhead, chasing down a dead woman, and trying to get his best friend to stop hounding him about a business he wants no part of. When a set up sends him straight to Tulane Medical, and into the care of the girl he never forgot, Ryan finds the strength and healing to unravel the mysteries of the past.

So I was really looking forward to reading these novella's. This set includes some of my favorite go to authors in it. I was so happy I was able to get an ARC of this set..... Now I've had this set read for days now and I've been sitting here for days trying to figure out how I want to write this review. And unfortunately I still haven't really figured it out as I sit here writing it. Usually when I do boxed sets with several books I'll review each story, within my review.
I did really enjoy most of these novella's in this set. But I have to admit I was mighty disappointed in one of my favorites in a series. Than another one which isn't my typical cup of tea to read was very well written. So I think I'll just really talk about my three favorites in this set.
Off Duty:
I really enjoyed this one from Sawyer Bennett. I really loved Tim and Holly in this story. You could feel the attraction between them. It was a sweet reconnection and second chance between Tim and Holly. I wish this story had been longer because I loved Holly and Tim.
Rebound:
We get to follow Sam or as we know him from the Inked Men series, Flash. Where we get to see him trying to get over losing Izzy. Where Sam meets Fiona. I loved the banter between Sam and Fiona. This was definitely a hot hot read!!!
Healing Touch:
I loved Joss and Carson's story. They had awesome chemistry between the two of them. It was another hot one.
Like I said I enjoyed this set of books. Some more than others. But I'm not going to say anything negative about the one I was disappointed in. I just wish that story had been different than it was.
I'd give this whole set 4 Stars Out of 5 Stars.
You can purchase Night Shift on Amazon


Disclaimer: I received an ARC of this book from author Chelle Bliss for my honest review. The opinions in this post are 100% of my own and may differ from others.
Posted by Busy Bumble Bee Book Reviews at 3:05 PM