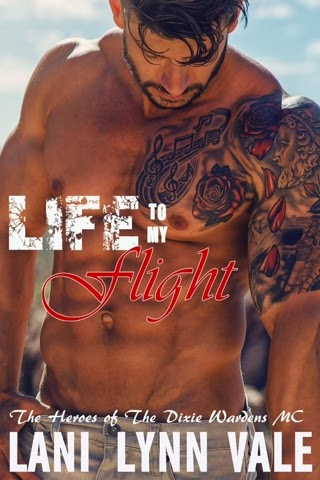 Title: Life To My Flight {The Heroes of the Dixie Warden MC series}

Cleo’s a Pararescueman for the U.S. Air Force. When a PJ is called, it’s because everyone else has said no. It’s one of the most dangerous jobs in the entire military, but also one of the most rewarding. It’s the reason he doesn’t form relationships. He’s seen his teammates divorce one by one, and he doesn’t want to do that to a woman. Especially one that he’s supposed to love. However, nowhere in his grand scheme did he plan for the force that was Rue.

Rue’s life has been rough. What she needs is a break. One that’ll distract her from the fact that she’s drowning in responsibility. It comes in the form of a dark and dangerous biker who has a habit of putting his life on the line. He gives her the world, and she holds on with both hands, knowing that he only wants to be friends. Or does he?

Thinking she knows what’s best, she pushes him too far, causing his control to take flight, and Cleo to disappear before the dust settles. One night of passion turns into a year of heartbreak as Rue tries to find the ability to move on from Cleo. He was pretty clear with his wishes, and they didn’t include her.

Cleo’s not through with Rue, though. Not even a little bit. She’ll be his. All it’ll take is a little bit of…persuasion


My Review:
So I have to say I was a little shocked when I heard Life to my Flight was coming out so soon. I had actually just finished Keys To My Cuffs when I heard this one was coming out a month later. But I was so excited that I wouldn't have to wait to long to read the next one. And I have to admit that a month seemed so long to wait to read this. I was really looking foreward to reading Cleo and Rue's book.
I have to say I loved Rue's character. She's independent, caring, feisty. She doesn't seem to let anything get her down. Except for when Cleo just disappears on her. And I loved the chemistry between her and Cleo.
I loved loved loved Cleo. He's sweet, caring, dominate, possessive, and sexy. He's got a job he loves, but knows the difficulties that comes with being a PJ. He's also little bit stubborn.
Like I said above I was really looking foreward to this story and hoped it didn't disappoint. And boy author Lani Lynn Vale didn't let me down. I loved this book from the start to the finish. There's just something about this series that keeps pulling me back and never gets boring. This book isn't just a about MC club, in fact that takes a secondary role in this book. These books are about so much more. There about these men and their jobs, and family.
I literally couldn't put my kindle down when I started to read this book. I laughed, I cried and there were a couple times I wanted to throw my kindle across the room. But I held on and kept reading.
Oh and can't forget the smoking hot smexy scenes.
I give this 4 Out of 5 Stars and cannot wait to read Torrens story next.
Disclaimer: I received an ARC of this book from  Give Me Books  for my honest review. The opinions in this post are 100% of my own and may differ from others.
Posted by Busy Bumble Bee Book Reviews at 1:59 PM