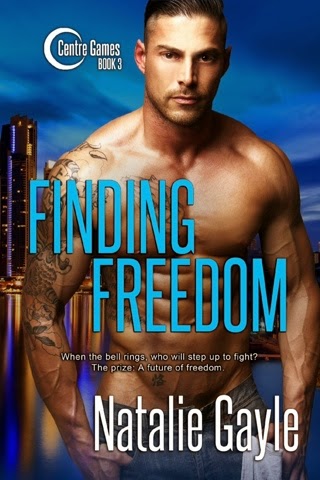 
Dylan “Ice Dragon” Thompson has suddenly become the hottest thing in MMA. He’s fought all his life for control and inner peace. He focuses on what he excels at—fighting and his work with the Centre. It’s what he knows and what keeps him in balance. His latest assignment has him fighting a war with a partner he doesn’t believe he can trust.

Vanessa Aldridge has grown up in the gym and has seen it all—some good, some bad. But when performance-enhancing drugs threaten her life and her personal sense of worth—enough is enough. The very people closest to her now have her questioning their motives and nobody is as they seem. On top of all this, she’s unwittingly become the number-one pawn in an organised crime game and she’s risking her heart on a guy who wants to fight for everything but them.

Vanessa quickly discovers that Dylan is far from what he appears to be. But what happens when his latest assignment blows his carefully created world wide open? Can Dylan win the most important fight of all—the one for her heart and their future? Or will he retreat back into the one-dimensional existence of working and fighting? Can Vanessa remain steadfast to her principles and just maybe take the ultimate prize? The battle lines are drawn.

When the bell rings, who will step up to fight? The prize: A future of freedom.

So I only recently started reading books that had the main characters as MMA fighters. I never really saw the appeal until recently. So this is book three in this series, and I do have to say that this book deals with some very real and serious issues with performance-enhancing drugs. I really do appreciate the fact that Mrs. Gayle seems to take her time and do the right research for her books.
In this book we get to know Dylan is a MMA fighter. Though Dylan's attitude could probably throw anyone off at the beginning. I found myself liking him by the end. I also liked Vanessa. And once again you could feel the attraction between Dylan and Vanessa.
This book is definitely different and really shows a different aspect of performance-enhancing drugs. The dark and nasty side and how far some people are willing to go to get them.
I would definitely give Finding Freedom 4 Stars out of 5. Once again Mrs. Gayle weaves a great tale with twists and turns again. And as with the other books in this series it has a little bit of mystery, suspense, action and some smoking hot smexy scenes between the characters. I also like that you can read these books as stand alones.

Disclaimer: I received a copy of this book from Book Empire Promotions for my honest review. The opinions in this post are 100% of my own and may differ from others.
Posted by Busy Bumble Bee Book Reviews at 1:39 PM