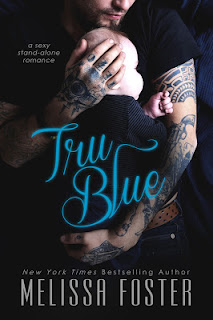 Imagine falling in love with a man, then finding out he was a killer...TRU BLUE is a sexy, dark stand-alone novel written in the same loving, raw, and emotional voice romance readers have come to love, and the deeply emotional literary prose women's fiction readers have come to expect, from New York Times & USA Today bestselling, award-winning author Melissa Foster.

He wore the skin of a killer, and bore the heart of a lover...

There's nothing Truman Gritt won't do to protect his family--Including spending years in jail for a crime he didn't commit. When he's finally released, the life he knew is turned upside down by his mother's overdose, and Truman steps in to raise the children she's left behind. Truman's hard, he's secretive, and he's trying to save a brother who's even more broken than he is. He's never needed help in his life, and when beautiful Gemma Wright tries to step in, he's less than accepting. But Gemma has a way of slithering into people's lives and eventually she pierces through his ironclad heart. When Truman's dark past collides with his future, his loyalties will be tested, and he'll be faced with his toughest decision yet.

I have to say before I even dove into this book I had heard excellent things about this book. So I couldn't wait to dive in and read it. Also I have to say that the description is what really pulled me towards this book and wanting to read it. Now am I going to say that this is a Must Read book? Maybe.... Possibly....

But I will say this if there is one book that you should probably buy this year than Tru Blue is definitely the one to pick up and read.

What can I say about Truman Gritt? Well he's going to rip your heart out. There really isn't any way that you aren't going to love Tru. He has been through so much in his life, from a drug addicted mother whom didn't have any concern for her children, to the undying love that he has for his younger siblings, to going to jail for six years for his brother. His back story will pull at your heartstrings. Now Tru finds himself the sole provider for two younger siblings he had no clue about after his mother passes away from a drug overdose. He also is unyielding in his hopes of helping his other brother kick his drug habit. Tru is definitely a stand up, sweet, caring, protective, and loyal person.

Gemma I have to say I did like her. Though she didn't come from the same background as Tru, in fact she came from the exact opposite. It wasn't all happiness for her either. I did really like her at the beginning of the book. Than towards the end she was alright.

This book deals with a lot of issues from drug addiction and abandonment. But underneath it all it deals with the heart of being family and loyal. Because lets be honest would you be willing to give up your life for your younger sibling? How long would you being willing to try and save your younger sibling for their mess ups?....... Besides all of Truman and Gemma's stuff going on in this book. There's also the aspect of the true friends Truman has in the Whiskey siblings.