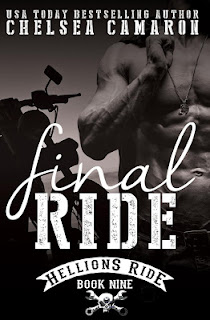 Everything I have never had is right in front of me. Family, it’s mine for the taking. For the first time in my life, I found stability in the Hellions MC. From the ground up, I’ve been loyal to my brothers.

Now the time has come when I may have to choose between the family I’ve never known or the club I’ve built and given my all to.

Richard ‘Frisco’ Billings is the California kid who rode into Haywood’s Landing when the Hellions were needing an extra man. As an original, he’s been with the club from day one. After growing up with no real place to call home, he’s found solid ground.

All of it crashed around him when secrets were revealed and he found out he missed all the formative years with his daughter being raised in an enemy’s club.

Amy Mitchell was lost her whole life until she was found by the Hellions MC in a bad situation with Felix Delatorre. She spent years with the club, rebuilding her life and finding a place where she could belong.

When a new young woman comes into the home she has with Frisco, will she still fit into his world? Will Frisco find a way to make everything work together? Will this be his final ride with the Hellions as life takes him down a different road?

Catch up with all your favorite couples as every secret finds its way out of the dark and new things are revealed, changing the club forever. This is the final ride for the Hellions MC as we know it.

Although Final Ride is supposed to be mainly Amy and Frisco's story. This book is about all of the Hellions. Final Ride start's off right where Original's Ride ended and Frisco finds out he has a daughter.

This review is kind of hard for me to write because there's so much I want to say. But at the same time I don't want to give anything away. And I'm afraid I would give away way too much if I actually type what I want to type. So I'm going to try and keep this spoiler free as much as possible.

I will say this I truly tried to give Frisco's daughter a chance I really did. But by the end all she did is really frustrate me. And I think by the end she tried to late. I will say this though I'm happy that Frisco and Amy finally got their happy endings.

Also by the end of this book I was so not ready to go on the emotional roller coaster of feelings at the end. I haven't cried that much at the end of a book in a while. I will say this, this book is not a stand alone book and you really should read the other books so you can understand whats happening. They all tie together.


Disclaimer: I received an ARC of this book from Enticing Journey Book Promotions for my honest review. The opinions in this book are 100% of Busy Bumble Bee Book Reviews and may differ from others.

Posted by Busy Bumble Bee Book Reviews at 8:11 AM