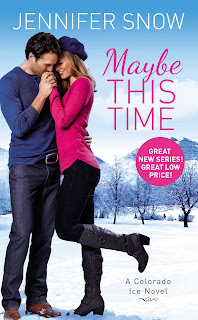 Starting over means a second chance . . .

Abigail Jansen is done with hockey . . . and hockey players. After leaving her two-timing NHL-star husband, Abby decides to start over in her hometown of Glenwood Falls, Colorado. There she doesn't have to deal with people gossiping behind her back or hear the word "hockey"—until her daughter tries out for the junior hockey team. Now Abby has to face her fears . . . and coach Jackson Westmore. He's tall, dark, handsome—and happens to hate her.

All through high school, talented hockey player Jackson Westmore had a crush on Abby, but he would never make a move on his best friend's girl. He gave her the cold shoulder out of self-preservation and worked out his frustrations on the ice. So when Abby returns, newly divorced and still sexy as hell, Jackson knows he's in trouble. Now even the best defensive skills might not keep him from losing his heart.

I have to start by saying I was super excited about this book when I heard about it. I mean I love hockey themed romance books. So I was really excited about starting this new series. Now what I didn't realize was that this was kind of the second book in this series. Also my excitement kind of fizzled out. I'm not saying this was a bad book, because it wasn't at all and I'll explain why my excitement fizzled out.

Here's the thing going into this book I thought I knew what to expect and usually going into a book I know what I'm headed into. But this book wasn't at all what I expected. For half of the book, maybe a little bit more than half the two main character's Abby and Jackson don't get along at all. Or at least they acted like they didn't like each other at all. So it made it very hard for me as a reader to really feel a vibe between them or feel like they actually belonged together. Now don't get me wrong I'm not saying I didn't like their character's, because I did like them. But with everything that happened beforehand and them acting like they didn't get along. I just wasn't really feeling them as a couple. I think the term too little too late really applies to them.

I thought that Abby was a very likable character. Abby finds herself in a nasty divorce with her husband and is heading back to her hometown of Glennwood Falls with her daughter in tow. She also finds herself dealing with her ex-husbands best friend and the one man who can't seem to stand her more and more on a daily basis. I thought that she was strong and independent, and proved to every one and herself that her and her daughter could make it on their own.

I did really like and enjoy Jackson's character. I thought he was such a sweetheart and caring. I was glad to see he finally grew a pair and decided to go after the girl he's been pinning for a really long time.

Even though this book did take a little bit of time to get into I did find  it to be rather enjoyable. And yes there were some aspects of hockey to this book. But it was really about a small town romance and two people getting a second (or really first) chance with each other. I did find that the other character's were very likable.

Disclaimer: I received an ARC of this book from the publisher for my honest review. The opinions in this post is 100% of Busy Bumble Bee Book Reviews and may differ from others.


Posted by Busy Bumble Bee Book Reviews at 7:00 AM