The first book in all three of New York Times Bestseller Becky McGraw's series are now available in a SERIES STARTER PACK called Lonestar Love Stories. If you are new to her, this is a great chance to get started on the Texas Trouble, Cowboy Way and Deep Six Security series at a deep discount. Individually, the books are priced at $11.97, but this boxed set is ONLY $4.99 exclusively at iBooks through 12/31/16.

TEXAS TROUBLE SERIES A western romantic suspense series with hot cowboys, a dash of suspense and a lot of southern humor--the perfect recipe for Trouble. All books in this series can be read standalone. My Kind of Trouble, #1 Texas Trouble When she left her hometown ten years prior, Cassie Bellamy had no intention of ever going back. But when her father is injured, she has no choice but to return, and can only hope that ten years was enough time to forgive and forget about the dark-haired devil who sent her running to Arizona. Her question is quickly answered with a resounding no when her old pickup breaks down and Luke Matthews stops to help her. Although he's no longer the nineteen year old badboy from her girlhood fantasies, the sex-on-a-stick, fully grown man is even more of a force to be reckoned with by her heart. To avoid him, Cassie hides out at the Double B Ranch with her father, but Luke Matthews isn't letting her run. He is on her two-yard line and won't be satisfied until he scores. When doubts about her shady business partner turn into dangerous facts, Cassie realizes the only one she can turn to is Luke. But could she convince the jaded playboy lawmen to help her? And if he agreed, could she protect her heart while he protected her?

THE COWBOY WAY Cowboys are a different breed... They work hard, play hard and love harder. It's all about the ride, until the right woman makes them fall. Hope for Christmas, the Cowboy Way novella that launched the series Cord Dixon, Mr. Laramie in the world of western clothing modeling, loses his job because he refuses to sleep with his female boss. Christmas is coming, and his bills are due, so he takes the only job he can find. A mall Santa. Socialite wedding photographer, Hope Carlisle's life disintegrates when she ruins the wedding of the year. In one fell swoop, she loses her best friend, her business partner and her fiancé. Unemployed and needing a job fast, Hope takes a job as an elf photographer at the local mall. She is not looking forward to her new job, until she meets her sexy Santa. Individually, Hope and Cord's lives seem to be a hopeless mess. But with the magic of Christmas in the air, they work together to reclaim their lives and find love in the process. Hope For Christmas was originally included in the holiday anthology Santa Wore Spurs. This novella launches The Cowboy Way series.

DEEP SIX SECURITY An edgy romantic suspense series with heat, heart and humor. Till Death, #1 Deep Six Security Dave Logan, the owner of Deep Six Security, is stunned when Dallas FBI head, Susan Whitmore, darkens his doorstep accusing him of being the cause of her losing her job, and demanding he hire her. Even as his brain says no way, the Barracuda is a woman nobody can work with, his white-knight complex forces him to offer her a job as his very overqualified temporary secretary. A wealthy couple who ordered a designer baby which wasn't delivered contacts Dave for help. To get answers for them, Dave has to get inside an overly-fortified fertility clinic going undercover with Susan as his temporary wife. The situation inside is worse than they imagined, and soon their pretend 'til death do us part' could become very real unless the two alpha personalities learn to work together to stay alive. 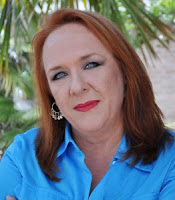 A Jill of many trades, NYT and USA Today Bestselling Author Becky McGraw has been an optician, a beautician, a legal secretary, a real estate broker, web designer, graphic artist, and romance writer. She knows just enough to make her dangerous, and her humor-laced contemporary western cowboy, and military, police procedural romantic suspense novels varied and interesting. Becky resides in Florida with her husband of thirty-three years and her dog Abby. She is a member of the Romance Writers of America Published Authors Network. You can contact Becky McGraw here: Facebook: http://www.facebook.com/beckymcgrawbooks Website: http://www.beckymcgraw.com Twitter: @beckymcgrawbook Email: beckymcgrawbooks@gmail.com

presented by WLKBookPromotions.com
Posted by Busy Bumble Bee Book Reviews at 9:29 AM