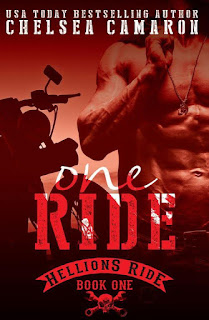 Delilah “Doll” Reklinger never imagined her life with anyone that wasn’t a Hellion. She never imagined a Hellion would come along and prove himself worthy enough to her father, Roundman, Hellions Club President. Content in living in the bubble of safety the motorcycle club family has always provided, Doll never thought that danger surrounded her.

Roundman has kept the Hellions contained for the last thirty years by controlling the chaos surrounding their lifestyle. When the dangerous side to their business comes knocking on his door, he realizes his precious Doll isn’t safe. The Hellions code may be that women and children are off limits in any altercation or dispute, but that doesn’t mean their enemies follow that same moral compass.

His only child, now in danger from the association to him and his club, Roundman makes a decision. He sends her away to a charter club, in hopes that the trouble won’t follow.

One ride across the country. One simple ride. Talon “Tripp” Crews has been ordered to take Doll on one ride away and to keep her safe. She’s off limits, his head knows this, but his body can’t deny the sparks between them. She’s feisty, fierce, and fearless. Constantly in close confines together, can they deny the chemistry? Will they give into the attraction between them? Can one ride turn lust into love?

I have to say that I started this series backwards. I believe I started on book four or something and than moved forward. So now I have gone backwards and started reading the books from the start. This is another one of my favorite MC series.

I have to say that Delilah "Doll" Reklinger is either a character you're going to love or you're going to dislike. Being that she grew up around the club and is the daughter of the president of the club Delilah knows how the life is. She's strong, tough, independent, and a bit sassy at times (which definitely gets her in trouble at times). I definitely had my moments where I just wanted to yell at her. Than I had my moments where I really liked her.

Now on the other had I loved Talon "Tripp" Crews. He's the president of the charter club of the Hellions. He's made something of and for himself, and he is definitely a stickler for sticking to the rules. Though when he meets Doll everything gets turned upside down for him.

As I said at the start of this review I started this series backwards. So it was nice to go back to the beginning and see how the series all started. I love that these books are stand alones, so if your like me and start in the middle of the series you won't be confused on what's going on. The only thing you might be confused who is who.

Posted by Busy Bumble Bee Book Reviews at 6:59 AM