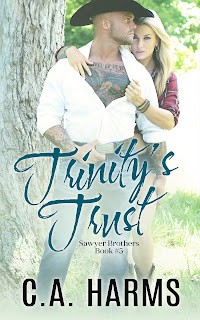 — SYNOPSIS —
Trinity Flores stumbled upon the Sawyer family when she needed it most.

She was broken, lost, and looking for a new beginning.

They gave her love that most dream of, unconditionally devoted to her well-being.

When Chase Douglas came to town, he hadn’t expected to do anything other than help his ill grandmother. Then the new deputy caught sight of the shy, blonde-haired beauty and it was impossible not to want to know her more. But he had no idea the torment he was about to face, or the obstacles he would encounter from the Sawyer Brothers.

They didn’t make it easy for him to win her heart. He had to prove himself first, and that just made him fight harder to prove he was the right man for her.

Gaining Trinity’s trust was his number one goal.

Because in Chase’s eyes, no one deserved the love of a devoted man more than the woman who captured his heart. 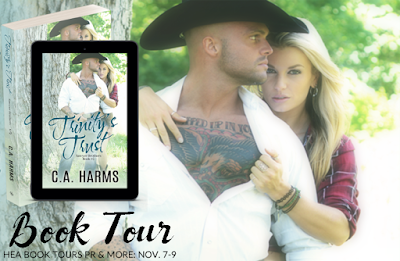 ADD THE BOOK TO YOUR GOODREADS TBR 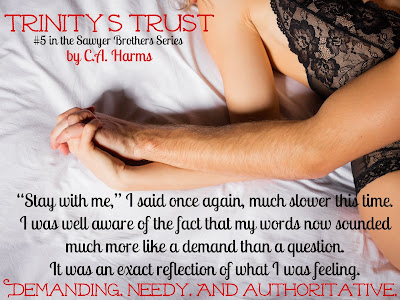 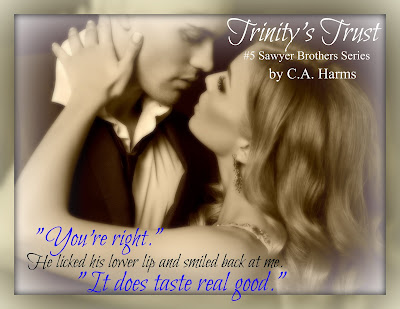 — EXCERPT —
Sometimes I woke from a dream of still being trapped in that house, still fearful of his anger. My mind would fall back to that place where I felt it was all deserved. Michael had a control over me I couldn’t explain, and I allowed it to continue for far too long.

I lived with it and just accepted it as my fate until that final day when I could no longer take the hate he showed me. I could barely even tolerate myself because I was so shameful of my life and how far I’d let things go.

It was my fault I never stood up to him; instead, I allowed him to knock me down daily and take all his anger out on me. He had a way with words that could make anyone feel inferior to him. He was condescending and manipulative and I was a fool.

It was disgusting, the person I had become.

I was really heartbroken now when I thought back on it all. How I’d wasted precious time, time I’d never get back.

But I escaped and somehow, by some miracle, I found my way to Livingston. I stumbled upon some of the greatest people with the warmest souls. And I was proud to refer to those people as my family. It didn’t matter that we didn’t share the same bloodline; they loved me just the same and I in turn loved and adored them. It was because of the Sawyer family that I found the strength to press charges against Michael for the things he had put me through. It was because of them I filed for divorce and started to once again live my life.

I would forever be grateful to Noah and Ryan for helping me find the right path that day. They honestly could have shipped me down the road and forgotten about the homeless girl they found stranded in a car on a back country road. Instead they introduced me to the women they loved, and in turn I found myself surrounded by so much joy I had no idea what to do with it all.

The three Sawyer men referred to me daily as their sister and so did their wives. And Tammy, God bless her, gave me the love of a mother, something I’d never had before, and nothing had ever felt so good.

It was something I treasured and in no way could I ever explain just how thankful I truly was.

The bond we’d formed could never be broken. I was finally home.

I had become so wrapped up in my own thoughts I hadn’t heard the bell above the door of Sassy Ladies chime, announcing a customer had entered. But at the sound of a deep voice just a few feet behind me, I yelped in surprise as I spun around with my hand pressed tightly against my chest.

There, only a few feet away, stood the man who’d starred in so many of my dreams lately. So vivid and convincing that it was hard not to feel they were real. 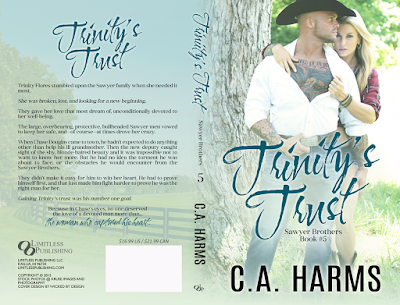 C.A. Harms is like any other addicted reader. She enjoys happy endings and HEA love stories. She hasn't always been a lover of Romance and had once been addicted to a good Mystery. Just recently she has taken on a new liking and now is a full blown Romance novel addict.

She lives in Illinois and enjoys spending time with her husband and two children. You will always find her with her kindle or paperback in hand as it is her favorite pass time.