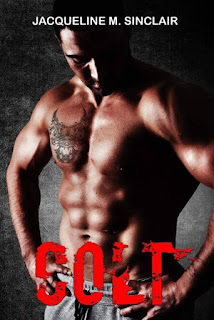 Looking at me today, you’d never know me as the man I used to be. This time last year, I was steps away from the NFL, but a phone call from my mother changed everything. “You make them pay. Every last one of them.”

My dad had been murdered, left to die in a filthy, roadside bathroom. I was consumed with a hate so strong that I gave up everything to join his brothers. Now I'm a fully patched Demon, and it's time for war.

I didn't know where else to go. The Demons of Destruction MC needed information, and I needed protection.

Meeting Colt was a twist I hadn’t expected. The pictures in the paper didn't do him justice, and when we met, there was an attraction I couldn’t explain. I know he feels it too, but the very thing that brought us together could be what tears us apart.

Once he gets his revenge, he'll never be the same. Once he learns I'm the reason his father died, neither will we.

I have to say this is the first book I have read from Mrs. Sinclair. I actually went back and forth between whether or not I was going to have the time to get this book read on time or not. Or if I should have just waited and read it at my own pace. But the description of this book is really what drew me in and made me want to read it. I'm really glad I got the chance to read it.

I really liked Colt. Colt is off pursuing his football career in college. but finds himself back home and joining the Demons of Destruction after his father is murdered. I thought that even though he kind of acted like a co*(y playboy, that he was actually a real sweetheart and caring underneath it all. But don't get me wrong also underneath it all there is a darker side to him.

Hmmmm Maci..... Maci was an interesting character.... She was a young woman who is on her own after losing both her parents. She's supporting herself with a job and trying to do classes also. But she also happens to be a young woman who happened to be at the wrong place at the wrong time (as some may say). Now a year later Maci finds that night is coming back to terrorize her and she finds herself going and seeking the Demons of Destruction's help.

I have to say that even though I really enjoyed this book, I was a bit confused at the beginning of it. But it did all get cleared up after a few chapter's and I understood what was going on. I did think that the character's were very likable.

I'm giving this book 4 Stars out of 5 and can't wait to read more of this series!!!!

Disclaimer: I received an ARC of this book from Enticing Journey Book Promotions for my honest review. The opinions in this are 100% of Busy Bumble Bee Book Reviews and may differ from others.