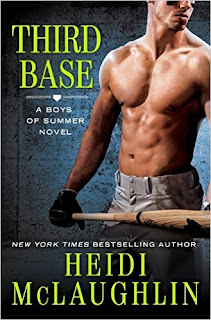 Ethan Davenport is already Boston's most eligible bachelor. In his second season with the Boston Renegades he has set his eyes on the girl behind the visitors' dugout. That girl is Daisy Robinson, a journalism student at the University of Boston and a die-hard Renegades fan. But with new found love comes challenges and Ethan and Daisy have to deal with his crazy schedule, school finals and his presence on her campus for some much needed media training.
For Ethan nothing can come between him and Daisy, until a secret that she's been keeping threatens to destroy them both.

This is the first time I have read a book from Mrs. McLaughlin. But I love Sports Romances, especially baseball ones. And this sounded interesting and that it would get you in the mood for Summer time. You know since Baseball and Summer go together.

That being said onto my review. I had a hard time connecting with this book at first. The first few chapters you couldn't really tell, or at least I couldn't tell who's point of view I was reading. It's wasn't really until the third, yes third chapter I figured it out.

I liked Ethan, even though he was evidently a bogger picking, address giving third baseman. I wouldn't say he was co(ky, but he definitely knew he was a good player. He definitely had confidence in himself.

I guess you could say I liked Daisy. But I kind of feel like something was missing. I really didn't feel a connection with her character. I'm not sure if that's because the book was in Ethan's point of view or not.

As far as Sports romances go I thought it was good. There was a tiny bit of mystery going on with who the blogger was, but I figured it out pretty quickly. Here's the thing though as I stated at the beginning, I really didn't feel any connection with the characters. I didn't feel any of the baseball brotherhood, I mean sure we got to see Ethan with his teammates during a game or in the locker room. But that was about it, you don't really see his teammates anywhere else in the book. I just, I guess in sports romances I kind of expect to see a brotherhood of some sort.

Disclaimer: I received an arc of this book via Netgalley for my honest review. The opinions in this post are 100% of my own and may differ from others.