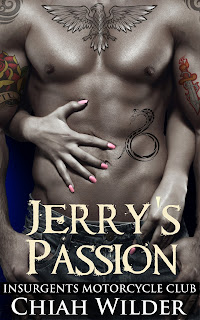 The first time Jerry saw Kylie, he was taken by her beauty and innocence, but he stayed away because she was too young.

A member of the Insurgents MC, Jerry’s life revolves around the club, his Harley, and easy sex. Women clamor for the rugged, tatted outlaw’s attention, and he obliges, but his sights are set on the pretty, young blonde who is all grown up now—sweet curves and all….

Kylie fills his thoughts, and he dreams of his fingers tangling in her glossy hair, her legs wrapping tightly around his waist, her full lips quivering as she comes.

Only problem is he can’t have her.

But… he can’t stop himself from craving her, and if he acts, it’ll surely cost him everything.
His resistance is waning….

Kylie McDaniels is the pretty daughter of Banger—President of the Insurgents MC.

She grew up in the outlaw biker world, but her father shielded her from the dark side of it, and she still has an innocence he prefers she keep. Banger is very protective of his daughter, and he’s made up his mind that she won’t fall in love with a biker, especially Jerry.

She’d listen to her father, but the hot, muscular biker makes her want to do some not so innocent things.

Her insides melt, and her brain turns to mush whenever he looks at her with his hungry, brown eyes.

Damn. Why does he have to be so sexy?

As Kylie maneuvers her budding sexuality and attraction to Jerry while trying to stay on the good side of her dad, someone is out there watching her, waiting to make his move. He’s come for retribution, and Kylie is the pawn in his scheme. Will Jerry be able to stop the madman before he strikes?

Can their forbidden love survive the chaos of the world around them?

The Insurgents MC series are standalone romance novels. This is Jerry and Kylie’s love story. This book contains violence, sexual assault (not graphic), strong language, and steamy/graphic sexual scenes. It describes the life and actions of an outlaw motorcycle club. If any of these issues offend you, please do not read the book. HEA. No cliffhangers! The book is intended for readers over the age of 18.

I have to say that author Chiah Wilder and her Insurgents MC series has probably become one of my go-to series. I'm always waiting for the next book and am always excited when I see the next one. I will admit I wasn't as excited about Jerry and Kylie's book. But I'm really glad I got a chance to read it. Jerry and Kylie's book turned out so much better than I thought.

I loved Kylie in this book. Though I will say I thought she was a bit of a brat in her dad Banger's book. Though I understood why she was that way, considering it had been just her and her dad for several years. Also I'm sure it isn't easy being the daughter of the president of an MC. In this book despite being Banger's daughter, we get to be the strong young independent woman she is. And she is definitely Banger's daughter with her attitude!!!!

Jerry, Jerry, oh Jerry..... Even though we have see Jerry in the other books in this series, we really don't know much about him. Even though he knows it's a really bad idea to get involved with Kylie, he just can't help himself. I have to say my heart broke for Jerry with his family situation. Though I have to say there we were a few times during the book where Jerry's attitude got the best of him and I just wanted to shake him.

As I said at the beginning of this review I wasn't as excited about this book as I am the others. But I am really truely glad I had the chance to read it. Because it turned out so much better than I thought it would. It hooks you right from the beginning and keeps you guessing who the stalker is. This book has everything going for it, there's inside drama and outside drama, there's action, there's suspense, there's family drama, there's some heartbreaking moments, and the scenes between Jerry and Kylie are Hot.


Disclaimer: I received an arc of this book from enticing journey book promotions for my honest opinion. The opinions in this post are100% of my own and may differ from others.


Posted by Busy Bumble Bee Book Reviews at 9:46 AM