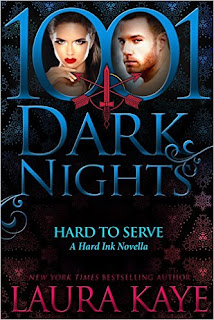 To protect and serve is all Detective Kyler Vance ever wanted to do, so when Internal Affairs investigates him as part of the new police commissioner’s bid to oust corruption, everything is on the line. Which makes meeting a smart, gorgeous submissive at an exclusive play club the perfect distraction… The director of the city’s hottest art gallery, Mia Breslin’s career is golden. Now if only she could find a man to dominate her nights and set her body—and her heart—on fire. When a scorching scene with a hard-bodied, brooding Dom at Blasphemy promises just that, Mia is lured to serve Kyler again and again. Then, as their relationship burns hotter, Kyler learns that he’s been dominating the daughter of the hard-ass boss who has it in for him. Now Kyler must choose between life-long duty and forbidden desire before Mia finds another who’s not so hard to serve.

As much as I loved the Hard Inked boy's. I think Author Laura Kaye may have a hit with her new series. Hard to Serve is the start to the new

I really liked Kyler. He's a detective that finds himself desk ridden from a shot wound and under investigation from the new police commissioner, to clear out the dirty cops. He decides he needs a night at Club Blasphemy that he's a Dom at. Where he meets Min, who might just change everything for him.

I liked Mia. I thought she was sweet and sassy. You could feel the heat of attraction between her and Kyler from the start.

This was a really good start to the series. And think it's going to be a really good and hot series. We get  to meet a few of the other Dom's, a couple of them have already grabbed my attention.

Disclaimer: I received an arc of this book from InkSlinger PR for my honest review. The opinions in this post are 100% of my own and may differ from others.