All The Rage {Book Review} 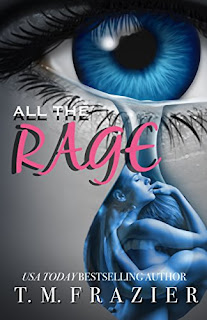 They call me Rage.
My real name is like a shadow, always close behind, but never quite able to catch up.
I fly under the radar because no one ever suspects I’m capable of the kind of brutal violence I commit each and every day.
You see, I’m a girl. I’m nineteen.
And I'm a killer.
This life is all I know. It s all I want to know. It keeps the s**t buried that I need kept buried. It allows me to live without thinking too much.
Without dwelling on the past.
Until him.
It all changes when an ordinary boy becomes my next target.
And my first love.
I have to choose.
The only life I ve ever known has to die, or he does.
Either way, I ll be the one pulling the trigger...
All the Rage is a STANDALONE


So we first meet Rage in Soulless. And I thought she was the most interesting character. I just wanted to get to know more about her. So when I found out she was getting a book I just knew I had to read it.

Like I just said above I really liked Rage from first meeting her. She really was an interesting character and I wanted to know what made her tick. On the outside Rage looks like your typical sweet next-door type of girl. But on the inside she's got a lot going on. She's angry, she feels no emotions, and she wants to kill. I found Rage to be independent and although I probably wouldn't want to do half the stuff she wants to do, she was very likable. She also made me laugh at times.

I really liked Nolan. At first he kind of came off as the bad boy hockey player that can get all the girls. But Nolan finds himself injured and back at his grandparents cottage. But as we got to know him better I found him to be very sweet and caring.

Even though Nolan and Rage start off as friends you could feel the attraction between them. This book like all T.M. Frazier books just when you think you know what's going on and know what to expect she throws some twists to you. I did find this book to be very enjoyable.

Disclaimer: I received an arc of this book from TRSOR promotions for my honest review. The opinions in this post are 100% of my own and may differ from others.


Posted by Busy Bumble Bee Book Reviews at 10:31 AM