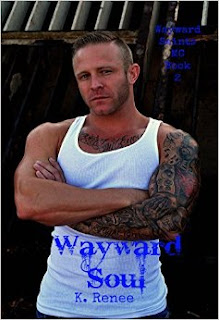 Can two broken people put each other back together again? Casey Stewart has spent her high school years being picked on and never being enough for her parents. Starting college in Seattle is the opportunity she has been waiting for to shed her old image and create a new one. Casey is on the path to destruction. In a year, she has gone from the loner to the wild child. Can she be saved before she destroys herself? Alec "Gunner" Foster had a tough childhood. When his aunt and uncle step in and move him and his mom to Vegas, Gunner is finally able to be a kid again. Growing up with the VP of the Wayward Saints MC in Las Vegas, Gunner knew he wanted to be the some kind of man his uncle is. Dependable. Loyal. Fierce. With retaliation on his mind, can he stay true to himself and the first girl he's ever cared about?

This book follows Casey and Gunner. I will say I liked how this book at times was at the same time as Anslie and Brantley's book. You get see some things from other characters POV's. I guess you could read this book as a stand alone. But you might be a little confused with a few things if you haven't read the first book.
I have to say after a few days of thinking about this book and Casey's character, that I kind of have mixed feelings about Casey. There were moments where I really liked her. Than there were a couple of moments I didn't. Casey is sweet, caring, protective and obviously cares a lot about her friends. But other times I found her to be a bit whiney.
I liked Gunner. He's not the typical kind of guy you would think of a biker. He's kind of has the looks of the all-american boy next door, with just a tad of roughness around the edges. At times I just wanted to hug him with his past. But he's made something of himself and become stronger.
I really enjoyed this book. Casey and Gunners relationship starts off hot and fast. This book did throw me for a loop at one point that I didn't see coming. Again I liked almost all of the characters. You could sense the sense of family between Gunner and Brantley.
I'm giving this book 4 out of 5 stars!!!!

You can purchase Wayward Soul on Amazon

Disclaimer: I received a copy of this book from the author for my honest review. The opinions in this post  are 100% of my own and may differ from others.
Posted by Busy Bumble Bee Book Reviews at 9:38 PM