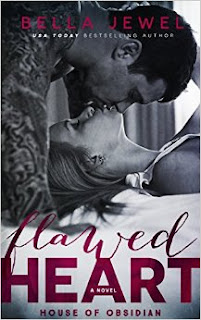 **This is a standalone second chance romance and contains a HEA**

I met him in college, and I fell in love.
It was a beautiful love, pure and perfect.
Max quickly became everything I could have ever wanted.
He was the jock, the popular guy, and I was just Belle.
But he made me so much more.
He gave me everything I could have ever wanted in life.
But one night, one accident. It changed everything.
The man I loved. The man I thought I knew...disappeared.
I can't tell you the exact moment he fell out of love with me. But he did.
I wish I could tell you there was hope.
That I hung on. That I fought.
I wish I could tell you that we fixed it.
That happily ever after was just out of our grips.
It wasn’t. I ran. In the dead of the night, I packed my things and I left him.

Five years later, I have returned.
He’s still the same man I left behind.
A deadly underground fighter for the House of Obsidian.
He’s still dangerous. He’s still broken. I still love him.
We're both holding a secret, and that secret might just change everything.
Maybe I was wrong.
Maybe I should have never left.
Did I give up too easily?

This is the part where I’m supposed to turn back around and run…but I don’t.
I can't.

I will admit that this is only the second book I have read from this author.  The first one was almost a year ago, well back in October. That other book I didn't really connect with the book or characters.  So I just haven't read anything else from this author. That is until I saw the sign up for this book and thought it looked interesting and thought I would give the author another shot.

I liked Ana she was sweet and caring. She's a mom who finds herself back to her hometown to take care of her dying mother. And at the same time trying to stay away from her husband and take care of their daughter. In a way I found Ana to be a bit nieve about (well maybe that's not the word I'm looking for here), but she seemed to still have an innocence about her. And you could tell she still cared for Max after five years of being apart.

Hmmmm what can I say about Max? I honestly kind of found him to be confusing at times. You could tell he had a very sweet and caring side, from his point of view. And you can tell he still cares very much for Ana. Though at times he still kept her arms length when he found out she was back in town. Though after reading why he pushed her away in the first place, I felt like I understood him a little better.

I will say this was an enjoyable read. It also goes back and forth, from the now to than, when they meet in college. I felt like it gave us a good idea of who the characters were. I liked the fact it wasn't just one person who messed up and even though it took them awhile, they both realize they made mistakes. In the end though I think you could tell how much they really still cared about each other.

You can purchase Flawed Heart on Amazon

Disclaimer: I received an ARC of this book from Give Me Books for my honest review. The opinions in this post are 100% of my own and may differ from others.
Posted by Busy Bumble Bee Book Reviews at 7:54 AM