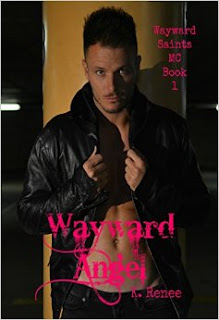 What do you do when the one thing you want is against the rules?

Anslie Davoli is the sixteen year old daughter of the President of the Wayward Saints MC, Cason Davoli. After her mom takes her away from the club at just five years old, certain circumstances bring her back into the club under her older brother's watchful eye.

Brantley Insico grew up in the club. His father is the Vice President of the Wayward Saints MC. At twenty-one, he thinks he's got it all, the club, his family, and no woman tying him down. One family barbecue and his world is turned upside down.

Brantley knows Prez's daughter is off limits, but he still craves her.

Will Anslie and Brantley be able to stay away from each other, or will they have to deal with the consequences

First I have to say I actually started this series with the first book. Instead of the third or second, which I occasionally tend to do. Which for this series is probably a good thing.
Anslie is a young girl who is leaving her mothers and going to live with her father and brothers. I liked Anslie and I even felt for her. She's a young woman who goes through more than one should. It's obvious her mother didn't care anything about her and her father and brothers did. She was sweet and caring at times. But there were times I also found her to be a bit stubborn and naive.
I loved Brantley right away. He was sweet, sexy, protective, domainate. Though he was also a bit stubborn a few times and that cost him some time. But you can tell how much he cared about Anslie and feel the chemistry between them.
I wasn't sure if I was going to enjoy this book or not. Since MC books are all I seem to read these days. But I did really enjoy it. This book has a little bit of everything in it. It made me giggle, had drama, lots of drama. Which I don't mind because I like drama. I liked all, well almost all the characters in this book.
I'm giving this book 4 out of 5 stars.

You can purchase Wayward Angel on Amazon

Disclaimer: I received a copy of this book the author for my honest review. The opinions in this post are 100% of my own and may differ from others.
Posted by Busy Bumble Bee Book Reviews at 9:32 PM