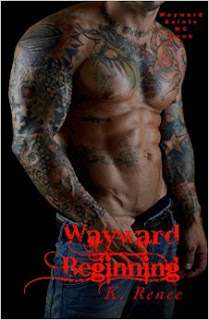 Cason Davoli has had his share of heartache and problems. No one ever said that being the President of the Wayward Saints would be a cake walk. After losing his wife to a rival club drive by and his daughter to her selfish mother, Cason vowed to never get close to another woman. The minute the sassy lawyer walked into his bar, he knew he was in for trouble. Henley Reid has strived to be the best lawyer she could be. At thirty-two, she’s finally happy with her career. The only thing she is missing is a love life, not that she would admit to it. The moment she walks into the Wayward Tavern, she knows her new clients are going to be trouble. One look at the Wayward Saints president and she’s hooked. Can Cason show Henley how to unwind and have some fun? Will Henley be able to prove that she’s nothing like is ex Selena?

So I have to say after reading the first two books I couldn't wait to dig into this book. And I have to say I was really happy that this book was about Cason. I was hoping he would get his own book. As I said with the second book, this book could probably be read as a stand alone. But at time you might be confused as to what's going on and who's who. So you may want to read these books in order.
I have liked Cason ever since the first book. I was hoping you would get to find out more about him and we do. He's a man who's been through a lot and than had spent years raising his boys and than getting his daughter. It's obvious he blames himself for stuff that happened with his daughter. He's protective of his family, sexy, dominate.
I liked Henley right away and thought she was the perfect match for Cason. She was sweet and had just enough sass.
Again I really enjoyed this book. I have become hooked on this series now. This book has a bit of everything. I have to say though at times the names get confusing in this series, because they all sound a like. But other than that there's nothing else.
Another 4 out of 5 stars and I can't wait to read Dom's book!!!!

You can purchase Wayward Beginning on Amazon

Disclaimer: I received an ARC of this book from the author for my  honest review.  The opinions in this post are 100% of my own and may differ from others.
Posted by Busy Bumble Bee Book Reviews at 9:45 PM