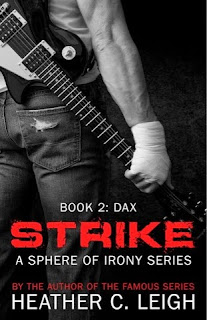 From a young age, Dax and his brothers are groomed to become money earners in their father's club. Broken bones and bruises are commonplace. Their father pits the brothers against each other to 'toughen them up' for the ring, using his rules to bend his sons to his will. His future is in the cage, not on stage where he dreams of making music.

Kate Campbell loves one thing in life. Well, two. Soccer and Dax Davies. Growing up in the poorest part of London, soccer is her personal escape from reality and from the fact that Dax doesn't seem to know she exists. She figures if she can be good enough at soccer, maybe she can get away from Hackney, and leave the poverty behind.

Kate doesn't plan on ever getting to know Dax as more than a passing acquaintance. In fact, she isn't meant to go with her friend to Dax's father's business, but that one night changes everything.

This is the first book in this series I have read by this author. I became a fan of her's with her military serial series.  I don’t read many rocker stories, but when I do they really have to catch my attention.  I have to say when I went into reading this book I wasn't sure what to expect.

This book starts out a little differently than I thought it would. It starts when Dax and Kate are just kids. We get to know them, where they came from, what their life was like.

I liked Dax. I should say I had mixed feelings about Dax. There were moments I really liked him. Than there was moments I wanted to hit him upside his head. There were other times I just wanted to hug him for everything he had gone through. I understood why he kept himself guarded.

Just as with Dax, I had mixed feelings about Kate. There were times I liked her. She was sweet, caring, and sassy at times. Other times I found her to be way to whiney.

Even though through all that I did enjoy it. I liked the plot and the flow of the story. I also liked the characters and secondary characters.

You can purchase Strike on Amazon, iBooks, Kobo

Disclaimer: I received an ARC of this book from TRSOR Promotions for my honest review. The opinions in this post are 100% of my own and may differ from others.
Posted by Busy Bumble Bee Book Reviews at 10:00 AM