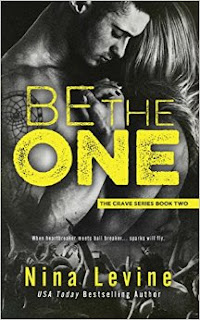 Title: Be The One {The Crave Series Book 2}

Jett Vaughn has one thing on his mind these days - Presley Hart.  He will do anything it takes to make her his.  At least, he thinks he will.

Presley Hart wants one thing in life - a man who will make her his number one.  After being married to a man who never put her first, she swore she'd never settle for second best again.  At least, she thought she wouldn't.

When Jett's life comes crashing down around him, his flaws are laid bare for all to see.  Presley stands by her man but there's only so much she can do to help him.  She loves him and wants to be with him but she has her limits and Jett's about to reach them.

In the midst of hurt, loss and destruction, can love win out?  Can a man who is struggling to find his way, show the woman he loves just how much he wants her to be the one?  Or is there only so much a heart can take before enough's enough?

So I admit I couldn't wait to read this book after how much I loved the first part and how the first part ended. I had really loved Presley and especially Jett. But I have to say and I really don't mean this in a bad way, because I did really enjoy this book.  But I also felt like it was missing something.

I really felt like the whole Lennon issue was pushed aside. Like he showed up at the end of the first part of the book and announced to Jett, that Presley was his wife. Than in this book it was just kind of like that was pushed aside by both characters and Lennon kind of disappears.

I really felt for Jett in this book. We get to know him a little better and my heart broke for him also. You can see how much he actually cares for people.

Presley has her moments with me in this book. More good moments than not. And you can really tell how much she cares for Jett in this book.

I did find this book enjoyable.  It made me laugh and made me teary-eyed. Though as I said at the beginning of the review it was missing something for me. Maybe I'm just reading to much and need to take a break. But it was nice to get to see Jett with his band mates.  All of his band members are interesting characters and would love to see more of them.

You can purchase Be The One on Amazon US, B & N, iBooks


Disclaimer: I received an ARC of this book from the author for my honest review. The opinions in this post are 100% of my own and may differ from others.
Posted by Busy Bumble Bee Book Reviews at 1:59 PM