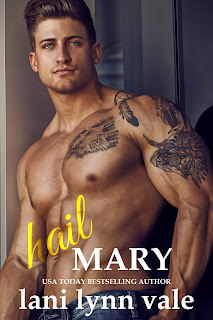 Her name is painful to think about. Mary, his newfound daughter, isn’t a wished-for child. Persephone, though? Yeah, destruction is a fitting description. And Hail? Yeah, that’s just the final f-you. The moment that her mother drops her off on his doorstep, Dante’s hell becomes complete. Or so he thinks.
What can make life worse after losing one’s wife and kids, you ask? Here’s what: being given a baby that depends on him for her survival. Finding out that the baby’s mother is dying of brain cancer, and has a husband that he never knew about. A husband that Dante knows in the marrow of his bones is trying to kill her just as surely as the cancer eating her brain.

Dante’s a bad person. He’s done some not so nice things, and now he’s being punished for his misdeeds. Karma is finally catching up to him. This child that he’s been stuck with is of his flesh and bone. This child is his salvation. This child is the final nail in the coffin of his wife and daughters’ too short lives. He doesn’t want this child. But this child will save him whether he wants her to or not.

With the help of a friend—yes, a woman friend—Dante finds his way back to life. But what he finds when he gets back isn’t the same life that he left behind. Turns out, he has to start living a new one.

One where he's suddenly having feelings for a friend that helped him get through some tough times, and loving a daughter that won’t let him quit.

So as I said in my last review besides Reed's book, I think this is the one book I have been waiting for the most in this series. And Dante has finally arrived and I couldn't wait to read his story.

Oh the feels for Dante and everything he has been through. And there were definitely plenty of feels for him. And my heart broke for him. I'm glad he finally came out of hiding and realized he needed his family as much as they needed him. And I'm glad he found his HEA again.

I liked Cobie, I really did. I thought she was sweet and kind. Though her wanting to run all the time got on my nerves. I do have to say though, although Cobie was likable. She wasn't really rememberable (intact I actually forgot her name as I was writing this review and had to go back and look).

I thought this book was very enjoyable. And as with any of Mrs. Vales book once I started I couldn't put it down. Although this book had plenty of feels and touching moments. I will say the end of the book just got a bit weird for me and I was like why is that in here. And I hate to say it but this one of the books where I kind of just felt like there was something missing either at the end of a chapter or beginning of the next.

And I just loved little Mary in this book!!!