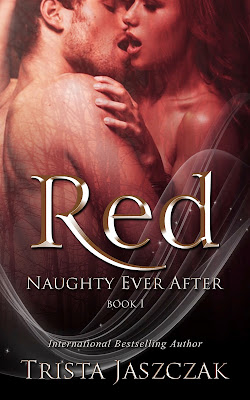 
Samantha Wentworth has one mission in life: to get as far away as she possibly can from her troubled past. When she finds herself on the Louisiana bayou, she runs straight into the arms of a very sexy Big Bad Wolf that she just can’t seem to resist. Will Samantha continue on her journey, or does the full moon have other plans in store for her? 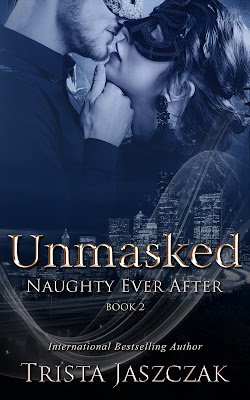 Cinderella is proof that a pair of shoes can change your life...


In Blair's case it just so happens to be a pair of $8,000.00 shoes. When she's given the chance to go to a masked ball to celebrate the rock band, the Huntsmen's latest album release her two fairy godfathers flip her life upside down. She doesn't believe that it could ever end in a one night stand with a rock star...and a lost $8,000.00 shoe...but it does. All Blair can think about is the mess she's gotten herself into and all prince of rock Hunter can think of is finding the woman he spent a night with, even though his only lead is a single, red-bottomed shoe. 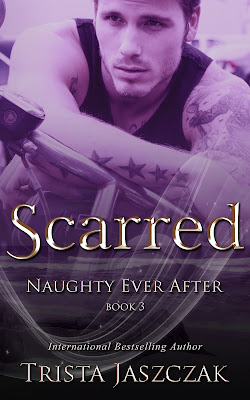 Who could ever learn to love a beast?...


Eric Morris had his priorities straight. Money, motorcycles, and models. That is until a motorcycle accident leaves him permanently scarred and angry with the world. He finds comfort in isolation, refusing to leave his own home for fear of what the world will think of the once beautiful man. With working beginning to pile up he has no choice but to hire a personal assistant to cater to his every need, including taking the force of his attitude. What he doesn’t realize is that Elle Davis is not like other women and she fully intends on putting Eric right into his place. Will Eric be able to make her see through his scars…will he be able to change for her?


I close my eyes tightly, only to hear Ethan’s voice demand, “Look at me,” in my ear.


I obey as I feel my body climax quickly. I let out a scream that surely frightens off anything else in the woods in a nearby radius. Ethan’s lips curl up, pleased, just before he leans in to smash his lips to mine. The kiss is all but brief and leaving me wanting more before his head yanks back and a low groan leaves his lips. His head leans forward to find my shoulder. His breathing is deep and ragged as he works to steady himself and brace me.


My trembling and weak body finally begins to relax as it settles on me what has happened. Ethan finally raises his head to lock eyes with mine. His eyes have changed. They seem softer. Relaxed and completely satisfied. I can’t even open my mouth, despite having tried. He holds his stance and keeps me in place as my body shivers.


I manage a slight nod.


He smiles, plants a kiss on the center of my forehead, and begins to reluctantly move.

“What’s wrong?” I ask, trailing into the room.


Christian is firmly planted on the employee couch with the television turned on. “I think you need to see this.” His eyes grow large as he points at the screen. I turn to face the TV and have one more sip of tea. He’s watching some celebrity gossip news show that I don’t quite recognize. What I do recognize, however, is myself from the masked ball plastered on the Times Square jumbo screen with the caption, “Have you seen my Cinderella? Cinderella, please find me again. Love, Hunter.”


I feel the cup slide from my hands and it crashes to the white tiled floor, spilling my tea everywhere. My mouth drops open and I have no idea what to say or do.


Christian gives me a silent nod as I hear the bell of the front door. I know that I should go to the sales floor, but I can’t. My eyes are glued to the screen, and my legs have somehow frozen in place.


“Blair! Christian!” We both hear Anthony who seems to be running towards us. He bursts through the break room door and glances at the mess on the floor. “Oh my God. You’ve seen.”


“I’m in the middle of Times Square!” I exclaim again as my head whirls.


I feel my mouth drop open slightly as I gawk at him. Makes me wonder what he’s talking about and if I can be nosey and pry just for a bit. I just have no idea what to say. I continue to stare with a slightly open mouth as I rock back and forth on my bare feet. I feel a chill run down my spine that makes me shiver and I immediately pull the white robe around me tighter. I watch Eric as he swallows and drags his hand down his face. He looks up at me with a pout.


“I think I’m still trying to figure out why I had the accident. I certainly didn’t plan it. It just…” His voice fades off and he shakes his head. “I should have died that day.”


I give my head a little shake. “It wasn’t your time.”


“Do you really believe that?”


I chew on my lip softly for a second as I think things over and finally give a little nod. “I do. Clearly you weren’t meant to die on that road that day, Eric.”


He moves closer to me, so close that I can feel warmth radiating off his body. Another chill rushes down me and I hug myself tighter. I look up at Eric who is staring intently at me. “What did Lucian do to you?”


“He wasn’t right for you, you mean?” I feel the blast of warm air and smell of peppermint of his breath.


I feel my body give a little shudder as Eric seems to lean a little closer to me. I can hear each breath he takes as he begins to study me again. I keep my eyes forward, a little nervous to look him in the eyes. I stare ahead at his neck and begin counting his heartbeat as I see each pulse throb…one, two, three, four, five….


“I’m just trying to figure you out.”


I giggle. “There’s nothing to figure out.”


“I’m willing to bet that there’s a lot more to you than you let on.” He tells me pushing my hair off my shoulder.


I shake my head. “I really hate to disappoint you. I’m pretty much an open book.”


His lips twist up at the corners. “An open book, huh?”


I take a deep breath in and smell nothing but the sweet peppermint from his mouth. He’s standing incredibly close and I hadn’t noticed him take a step forward.


“If you’re such an open book then why don’t you tell anyone what Lucian did to you?”


My mouth drops. What exactly is he trying to get out of me? The fact that I fell a little too hard and fast for Lucian and ended up having him crush my heart? I’d rather not take a trip down memory lane, thank you very fucking much.


I look into his eyes. I can’t think. I can’t speak. The smell of peppermint is intoxicating. My surroundings become blurry. I part my lips slowly and I feel my eyes begin to close.


“Eric.” Lucian’s voice makes me gasp and jump back as he walks into the room. “I just wanted to see if you were finished.”


I step away from Eric, slightly shaken up, and a little confused. I cross my arms and take a very deep breath. I release it slowly and count to five to relax myself. Eric turns and gives Lucian a nod as he seems a little distraught himself. “Just finished.”


“I…I should get dressed.” I say, looking at Eric who is running a hand through his hair as Lucian is telling him that he can have the proofs ready in a few hours if needed. Eric gives him a little nod, but his head turns to me.


“Did you have a good shoot, Elle?” I hear Lucian’s voice and even though I understand that he is talking to me I can’t take my eyes off Eric.


Eric smiles. “Did you have a good shoot, Elle?” He repeats, looking back at Lucian who is staring at us both like we’re crazy.


I shake out of the haze of peppermint and Eric’s blue eyes to nod. “It was great. I really hope they like the photos.”


“She was stunning,” Eric adds. “They’ll blow everyone away.”


Lucian raises his eyebrows and cocks his head slightly. “Alright, well…I can’t wait to see them. I bet they’re great.”


“I’m really cold…I’m just going to get dressed.” Eric and Lucian both give me a nod and as I walk away I can feel their eyes on me. I have no clue what just fucking happened. I feel…a little panicked to be quite honest. I nearly kissed Eric. Or…did Eric almost kiss me? I have no idea. My heart is still pounding at the thought. I swear to God…looking in his eyes is just like being charmed by a snake who is about to eat you. Completely unaware of anything around you except him. And that…is terrifying. 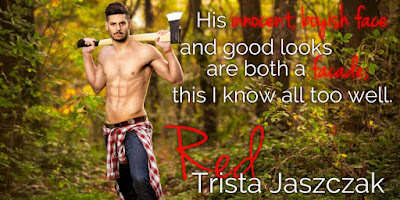 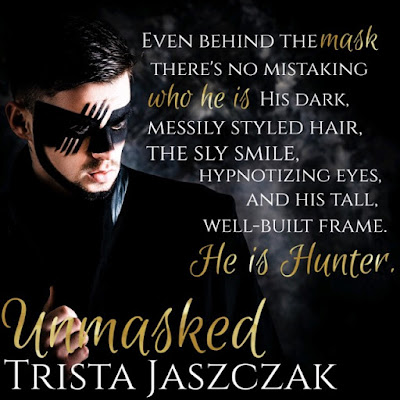 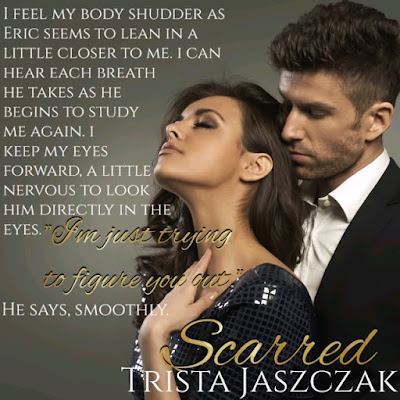 1. Déjà Vu by Georgio Moroder feat. Sia
2. Can’t Fight the Moonlight by Leann Rimes
3. Little Red Riding Hood by Sam the Sham and the Pharaohs
4. Leader of the Broken Hearts by Papa Roach
5. There’s No Going Back by the Sick Puppies
6. Big Bad Wolf (demo) by Lana Del Ray
7. Marie Laveau by Bobby Bare (be sure it’s this version, it’s the best!)
8. Broken by Seether feat Amy Lee
9. The Reason by Hoobastank
10. Broken by Seether (the original acoustic, because it’s beautiful)
11. Wherever You Will Go by The Calling

1. Gone, Gone, Gone by Phillip Phillips
2. Let Her Go by Passenger
3. Demons by Imagine Dragons
4. Ho Hey by the Lumineers
5. Crawling Back To You by Backstreet Boys
6. Just Want You To Know by Backstreet Boys
7. I Think We’d Feel Good Together by Rob Thomas
8. If You Leave by OMD
9. The Reason by Hoobastank (you’ll see why this works for book 1 and 2)
10. Casanova by Allie X 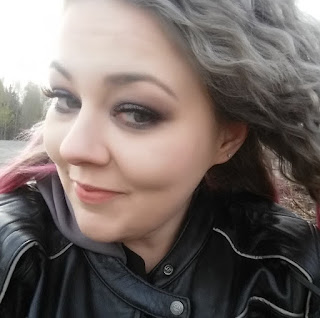 Trista Jaszczak (jazz-ick) is the international bestselling author of Red, Unmasked, Skin Deep, and Loverboy. She is an Air Force spouse and mother to two mischievous and rambunctious little girls. She is originally from Hamilton, Ohio but calls home where ever the Air Force sends her. She currently resides in Anchorage, Alaska where she finds endless inspiration in the pure Alaskan wilderness. When she isn’t writing, she spends her time with her family in the vast Alaskan outdoors, working as a make-up artist, running, or riding her Harley. She loves the outdoors, the moon, old movies, and music.