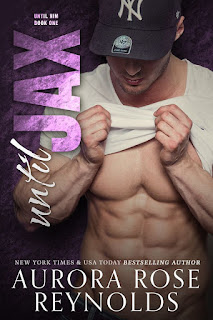 Title: Until Jax {Until Him, Book One}

Ellie Anthony isn’t looking for love. She isn’t even looking for a man, but when Jax Mayson insists on keeping her and her daughter safe, she’s left with no choice but to trust him. Now she just hopes she doesn’t get hurt when she falls hard for a guy who’s known for breaking hearts.

Jax Mayson knows that Ellie is his BOOM the moment he sees her. When he finds out she has a daughter, he realizes he wants a family, and he will do whatever is necessary to keep both of his girls safe, even if that means facing the demons from his past.

My Review:
I first want to say when I read the synopsis of this book it sounded good and like something I would enjoy. I also was under the understanding that this was a stand-alone book and a new series.
So with that being said I'll start my review. I was really confused when I started reading the book. I felt like I was missing a big chunk of the story. Which didn't make sense to me. I have to say I did go and look at some reviews to see if anyone else was as confused as me. I soon realized that everything else seemed to be explained in the book before.
I have to say I liked Jax. He's strong, protective and sexy. Though I did find it kind of annoying when he kept calling Ellie "baby" when he barely knew her. Though I do have to say it was sweet how much he cared about Hope and Ellie.
I also liked Ellie. Though as I said I was confused at the beginning with her and what was going on. Though I did feel for her.
I'm only able to give this book 3.5 stars out of 5!!!!!

Disclaimer: I received an ARC of this book from TRSOR Promotions for my honest review. The opinions in this post are 100% of my own and may differ from others.
Posted by Busy Bumble Bee Book Reviews at 8:42 PM