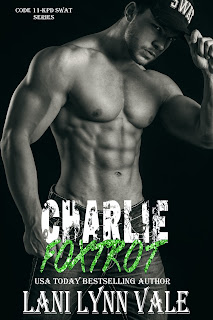 Foster made a promise in his hospital bed when his leg was taken from him that he’d get back to one hundred percent. Leg or no leg, he’d get back on the SWAT team if it killed him.
And he does get back. But he has a problem.
He can’t let go of the past.
The anger burns deep, making his emotions volatile at the best of times.
Then he meets Blake with her haughty attitude and inability to distinguish the difference between a pocket knife and a sword.
Little by little, she makes him whole again, one bad joke at a time.
She doesn’t see the revenge in his eyes, though. Doesn’t see the rage burning deep.
Rage so pure and all encompassing, that he knows it’ll explode.
It’s just a matter of time.
What Foster doesn’t realize, though, is that the love that Blake has for him is enough to fight his demons, one kiss at a time.
Foster never stood a chance.

Can I just start out by saying, YES!!!!!! As much of a fan of Mrs. Vales I am, and as much of a fan of her series I am. I have to say Charlie Foxtrot  is probably my favorite of this series, well besides Luke's book.

Oh Foster,  he is such a sweetheart and I just loved him. He's trying to figure out how to now be an amputee and still make his job work. There were a couple of times he seems to be a jerk and I wanted to smack him. But it was understandable where he was coming from and why  he didn't want to let anyone get close.

As I said above I think this book has to be my favorite of this series, besides Luke's book. This book was laugh out loud hilarious at points (and not in a bad way), it had your drama, and had points that brang tears to my eyes. I have to say I really felt like Mrs. Vale got back on point with this book. If you've read my reviews from the last two  books in this series, I kind of felt thone two books were missing something. Like they were missing some big chunks of the stories. Not that I didn't enjoy them, because I did. But I didn't get that feeling with this book, it felt like the whole story was there.

You can purchase Charlie Foxtrot on Amazon, B & N, Kobo and iTunes.

Disclaimer: I received an ARC of this book from Enticing Journey Book Promotions for my honest review. The opinions in this post are 100% of my own and may differ from others.
Posted by Busy Bumble Bee Book Reviews at 8:25 AM