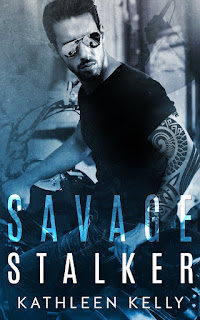 Katarina Saunders. Kat to the world, international rock star. Lead singer for The Grinders.
Until she has an accident that ruins her career and sends her running into the mountains, away from everything and everyone.
Dane Reynolds, President of the Savage Angels MC. Fierce, strong and loyal. He’s had his eye on Kat for a while now and has been waiting for her to come to him but he’s had enough of waiting. He’s decided it’s time to make her his.
But so has her Stalker, he’s been waiting for far too long…
Can Dane save Kat? Or will her savage stalker get to her first?

I got the chance to review this book when I had signed up to read the second book in the series. This was a good debut book from author Kathleen Kelly.  As I say frequently in my reviews in MC books, I am quite picky when it comes to them. And I never mind helping out a new author. But sometimes with MC books or really any book it can be a hit or miss. This wasn't a miss and I definitely really liked the plot of the book.

Katarina or Kat, as the world knows her is dealing with her life after having a major accident.  She finds herself in a new town dealing with the passing of her mother and not being able to sing anymore.  Kat is definitely a strong and independent character.
She also is a little bit sassy.

I loved Dane. He was sexy, smart, protective,  funny and definitely the typical alpha male. Also a little bit rough around the edges.

As I said above I liked this book and was an enjoyable read. It had a good plot and had a little bit of mystery added to it. I do have to admit that they were a few rough spot spots, that were a bit choppy. But I think that's to be expected with a debut book. There also were a lot of Point of Views in it. Now don't get me wrong I like seeing other points of views. But I didn't really feel it was necessary for them all to have their own chapter, as a few of them were very short. I also really liked the sense of family that the Savage Angels seemed to have. But other than that I really didn't see any other problems. And even after finishing, it definitely left me asking some questions.

I'm giving Savage Stalker 4 Stars out of 5 and can't wait to read more from this series.

You can purchase Savage Stalker on Amazon

Disclaimer: I received a copy of this book from Give Me Books for my honest review.  The opinions in this post are 100% of my own and may differ from others.
Posted by Busy Bumble Bee Book Reviews at 11:20 AM