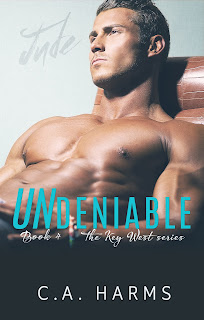 Sometimes in life you are forced to do things you may not agree with.

Family meant everything to Jude Calvert.
He would do whatever it took to keep them safe and provide for them no matter what it took to make that happen.

Even if that meant putting his own safety at risk, he had no other choice.

Callie Raine has always felt a heavy attraction toward Jude.

She knew there was so much more to him than he allowed anyone to see. But she was a headstrong woman and feeling weak was something she wouldn’t allow.

Except when it came to Jude.

However, when Jude is hit with the unexpected and forced to rely on others, Callie realizes he doesn’t take weakness easily.

He becomes even more withdrawn.

Will he finally give in and learn to lean on those who care?

Or will he push them beyond the point of no return
and once again be left to face his obstacles alone?

I will admit I have become a big fan of C.A. Harms in the last few months. Well really started reading her books. I will also admit that the Key West series are the set of books of hers I had yet to read. I will also readily admit I may have kind of read this series backwards. Long story short I had started with the first book (as I'm supposed to have the first three books read for a tour next week). But than I realized my review for this book was due today, so I jumped to this book.

I will admit I adored Jude in this book. He's dealing with a lot and has a lot resting on his shoulders. He's taking care of himself, his sister and her children. It's obvious how much he cares for them and how protective of them he is. I could also understand him not letting people get close.

Ahhh Callie, I guess she was an alright character. I won't say I didn't like her. But she was just ok to me. I really didn't connect with her character and at times she kind of got on my nerves.

I really enjoyed reading this book. And now can't wait to go back and read the first three books. My opinions on these two Callie and Jude may or may not change.


Disclaimer: I received an arc of this book from enticing journey book promotions for my honest review. The opinions in this post are 100% of my own and may differ from others.