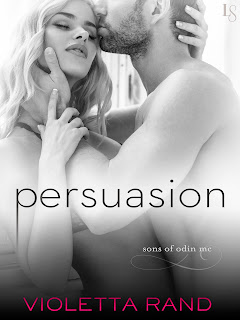 If you love the motorcycle romances of Joanna Wylde and Julie Ann Walker, don’t miss Violetta Rand’s irresistible novel about a sexy-as-sin biker who tempts a good girl to go bad.

Lang Anderson may be the new leader of the Sons of Odin motorcycle club, but his personal life is in shreds. He’s struggling to take care of his three young sisters in the wake of tragedy, while rumors of drug dealing within his ranks jeopardize everything he’s built. The last thing he needs is another distraction—like a bar brawl over a woman—but Lang is a sucker for a damsel in distress. And this one gets him roaring like a finely tuned engine.

High school guidance counselor Lily Gallo is no fender bunny. So why can’t she get Lang off her mind? Lily’s head says the rugged, rough-and-tumble biker who came to her aid is bad news. Her body begs to differ. But when Lang’s troubled kid sister walks into her office, Lily’s determined to help, even if it puts her in the crossfire of a gang war. On a crash course with danger and desire, Lily partners up with Lang to fight for his family—and for love.

This is the second book I have read by this author. I thought I would give it a chance since I'm a huge fan of MC books. And Mrs. Rand had come up with a new MC series and it sounded really interesting.

I have to say I loved Lang right away. He has a lot resting on his shoulders right now. He's become the acting president of the MC, while the real president is on trail. He's trying to hold the club together and keep it clean. On top of that he's raising his three younger sisters since his parents death's. I thought despite all that he seemed to be handling everything pretty well and was a sweetheart.

I have to admit after a few days that I have mixed feelings about Lily. I really liked her character at first. But than she kind of got on my nerves.

I thought this was a nice start to a new series. I will admit this was probably, ok it was on the lighter side of what I'm used to reading with MC books. But I thought it was pretty good.


You can purchase Persuasion on Amazon, B & N, Google Play, iBooks,  and Kobo.

Disclaimer: I received an arc of this book from netgalley for my honest review. The opinions in this post are 100% of my own and may differ from others.
Posted by Busy Bumble Bee Book Reviews at 7:23 AM