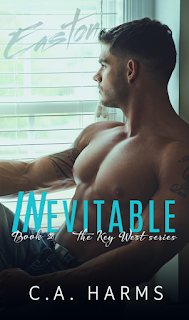 Harper Jameson, had built the necessary walls to keep her heart safe. Never again would she allow herself to be weak and vulnerable.
Confident and full of attitude.
A mask she wore that many fell for.
Except Easton Black.
He was equally confident, cocky and knew what he wanted.
Determined.
Things he wanted rarely escaped his grasp. He was immune to the façade Harper had created.
She was intriguing.
It was inevitable and Harper could sense that there was no way out. Easton Black would no doubt be the man who could change everything.
People arent always as strong as they appear to be on the outside

Inevitable is the second book in the Key West series and actually the third book I've read in the series. This book follows Easton and Harper.

Harper is Jett's sister. She's loud and opinionated. She's been hurt in the past and has some big walls built up. At times her mouthy-ness got on my nerves.

I liked Easton. He's the kind of guy that is used to getting what he wants. He has a past that he has to get over to move on.

I thought this was a good second book. There was a bit much drama in this book, but if you can overlook that it was a good read.

Disclaimer: I received a copy of this book from More Than Words Promotions for my honest review. The opinions in this post are 100% of my own and may differ from others.
Posted by Busy Bumble Bee Book Reviews at 10:11 AM