Tattered on my Sleeve {Book Review} 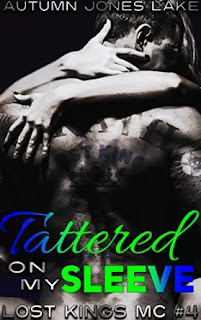 I had her first.
Eight years ago, the Lost Kings, MC was recovering from turmoil within the club Wrath and Trinity met.
I fell in love with her.


After three perfect nights, Wrath knew she was the one. But Trinity’s dark past was about to catch up to her and the Lost Kings MC was her only hope for protection.
Then we fucked everything up.
One misunderstanding led to a mistake that locked both of them into a war to see who could hurt who the most.


We’ve wasted too many years. It’s time for Trinity to understand—she’s mine.


When long-buried secrets are finally revealed, Wrath will stop at nothing to fix things and make Trinity understand she belongs to him.

My Review:
This series is one of those series that I actually have the first three books just sitting in my kindle library waiting for me to read. I just haven't found the time to read them with all the books that I actually have to read. So this book is actually the first book in the series I've had time to sit and read. But it is said that this could be read as a standalone in the series which I was glad for. So I didn't feel lost reading it.
I loved Wrath. He's the tough Sargent at arms for the Lost Kings. You could tell the attraction between him and Trinity right away. But they both were playing off each other for several years. There were times in the book where I just wanted to shake him to realize he belonged with Trinity.
Ah Trinity she was definitely a different read. She's been through a lot in her life. And even though she has a hard time trusting people she's definitely found a purpose for herself being with the Lost Kings. There were other times I wanted to reach in the book and shake her to.
I thought this book was an enjoyable read and really liked the characters. Though at times I wanted to reach through the book and shake them both for their stubbornness.  I also really liked the secondary characters in this book to.
I'm giving this book 4 out of 5 stars and can't wait for the next one!!!!!

Disclaimer: I received an ARC of this book from Give Me Books for my honest review. The opinions in this post are 100% of my own and may differ from others.
Posted by Busy Bumble Bee Book Reviews at 5:57 PM