Back to the Drawing Board {Book Review} 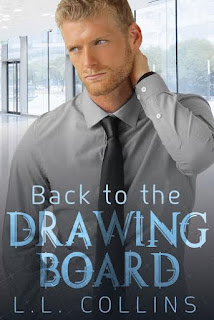 Title: Back to the Drawing Board

Lies. Betrayal. Deceit. Carter knows them all too well. His whole life was based on them. He decided long ago that his life would be on his own terms. No one would dictate his future, since he'd had no control over his past.

Julia is the bosses' daughter. She's everything that Carter wants, and nothing that he thinks he needs. She's got plans of her own, and Carter is one of them.

Both determined to control their own paths, can she show him what his future could be like if he just lets go, or will he send her BACK TO THE DRAWING BOARD?

I have been a big fan of Mrs. Collins every since I found her books and her Living Again series. With those books you knew what to expect, and knew to have tissues available with the emotions involved with those books. I couldn't wait to read this book. This book is a little bit different than her others. It was a little bit lighter and not as an emotional roller-coaster ride. But it's just as good as the others.

I really liked Carter. He was sweet and caring. He also kind of had the boy next door persona.  After surviving a crash that almost took his life and finding out family secrets. Carter finds himself starting over in a new town with his dream job. He doesn't want to open himself to anyone, until he meets Julia and everything changes.

I also really liked Julia. She’s independent, classy, sweet, caring and has just a bit of sass. She's not exactly living her dreams, but more like her parents. You can also tell how much she cares about and believes in her brother, enough to defy her parents orders and go and visit him. What I really liked about Julia's character is she felt real.

I really enjoyed this book and thought it had nice flow. The author definitely brought out the emotions in the middle of the book. I will say this I was a little confused at the beginning of the book with the family secret and not sure if it was ever fully explained. But other than that it was a great book, with real feeling characters.

Disclaimer: I received an ARC of this book from Love Beneath the Sheets promotions. The opinions in this post are 100% of my own and may differ from others.


Posted by Busy Bumble Bee Book Reviews at 10:43 AM